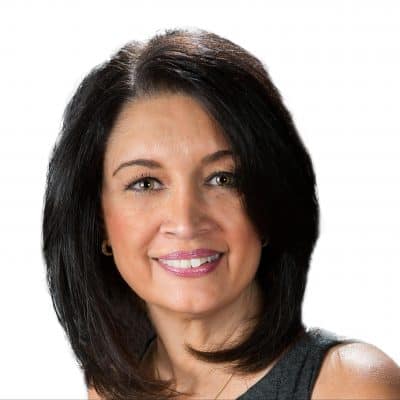 Right now I'm enjoying my summer on Long Island. It's the best time of the year here. I am a short car ride away from the Hamptons and the many East End vineyards I enjoy visiting. And when I need my fix of the Big Apple I hop on a train and visit my favorite NYC neighborhoods, restaurants and stores. It's the best of both worlds! But I also do a lot of backyard entertaining in the summer. If you'd like to see what I serve my guests, visit my food blog for easy recipes and traditional Greek foods. I've just completed and released the third and last book in The Gift Saga. In between all of that, I have a day job, spend time with my family and make appearances at book clubs, festivals and author events.

Effie Kammenou is a believer that it is never too late to chase your dreams, follow your heart or change your career. She is proof of that. At one time, long ago, she'd thought that, by her age, she would have had an Oscar in her hand after a successful career as an actor. Instead, she worked in the optical field for 40 years and is the proud mother of two accomplished young women.

Her debut novel, Evanthia’s Gift, is a women’s fiction multigenerational love story and family saga, influenced by her Greek heritage, and the many real life accounts that have been passed down. She continues to pick her father’s brain for stories of his family’s life in Lesvos, Greece, and their journey to America. Her interview with him was published in a nationally circulated magazine.

Evanthia’s Gift: Book One in The Gift Saga was a 2016 award finalist in the Readers Favorite Awards in the Women’s Fiction category. Waiting for Aegina is Book Two in The Gift Saga and the last book, Chasing Petalouthes, was just released on June 3, 2018.

Effie Kammenou is a first generation Greek-American who lives on Long Island with her husband and two daughters. When she’s not writing, or posting recipes on her food blog, cheffieskitchen.wordpress.com, you can find her cooking for her family and friends.

As an avid cook and baker, a skill she learned from watching her Athenian mother, she incorporated traditional Greek family recipes throughout the books.

She holds a Bachelor’s Degree in Theater Arts from Hofstra University.

Traveling, reading, entertaining, cooking. I also love to dance and play tennis but I haven't found much time for that lately.

The Mayan ruins were pretty amazing. Venice was breathtaking. Naturally, I absolutely love Greece and there are so many unique islands to visit, but to me it feels like a familiar second home. The language is one I've heard all my life and speak as well.

I just started using Sake bomb by Dry Bar. I need to use shampoo without sulfates because I straighten my hair.

I've always wanted a convertible. When I was younger I wanted a red Mustang convertible. I wouldn't say no to that, but i think I'd like a Mercedes convertible. Don't ask me model numbers. I'm not much of a car person.

Beach! The mountains are pretty to look at in a distance but there is something about the water that is so amazing. Eating at beachside restaurants is one of my favorite things to do in the summer.

Cheap people, rude people, inconsiderate people. It's really not hard to be nice!

My favorite book is East of Eden. It's timeless with so many lessons. But if I'm going to be honest, the one that changed my life is the first one that I wrote, Evanthia's Gift. I began writing it as a way of working through my grief over losing my beloved mother. But it evolved into something so much more. I rediscovered my creative side. Something I had ignored for too many years.

The only place i write is in my computer room. But ask may family where I'd like to write and they will tell you a little beach cottage on a Greek island for extended periods of time. Uninterrupted. Someday...

No. I don't. I'd get too distracted and want to sing along with the music.

There are so many in this series, but I'd have to say Alexandros and Anastacia. Alexandro's because he is the best of men. He went through hard times in life - realistic hard times - and came out of it a kind, compassionate man, not a bitter one. And when he loves it's with his soul. Anastasia because she is based on my mother. She has my mothers heart and devotion to her family. She has her elegance and strength. It was my way of honoring her and remembering her.

As I mentioned, I live on Long Island, NY. I was born in Manhattan, lived in Athens for a brief time as a toddler, lived in Queens until I was 9 and then moved to Long Island. I live a little further east from where I grew up.
view 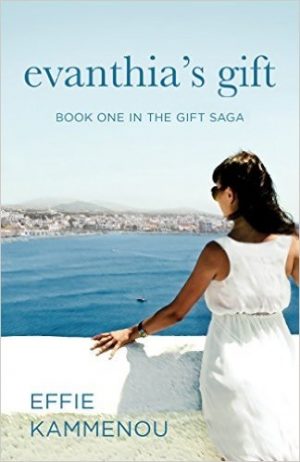 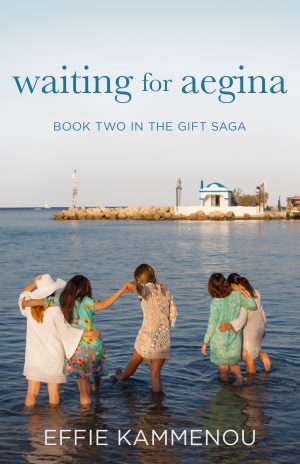 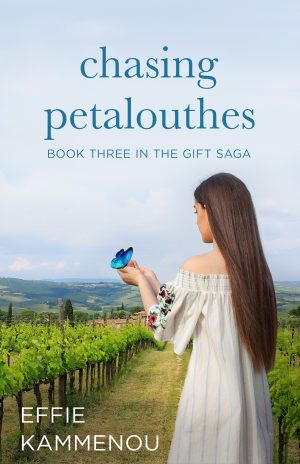 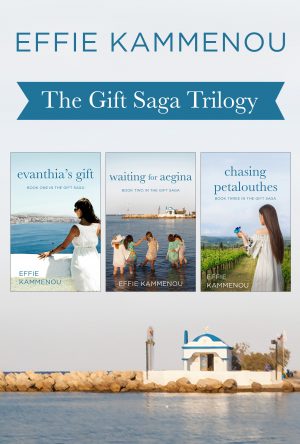 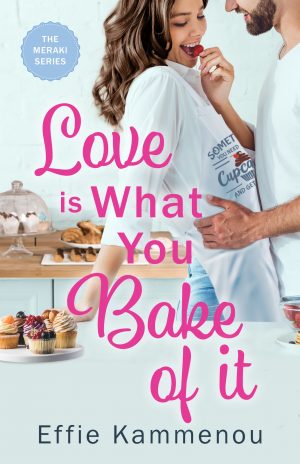 Love Is What You Bake of It
by Effie Kammenou
Adult
$2.99
view 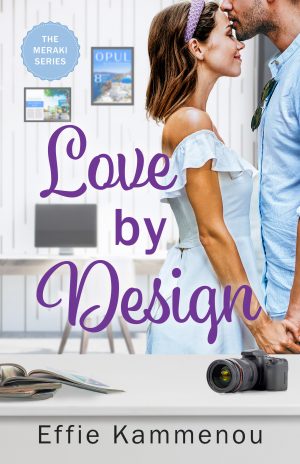