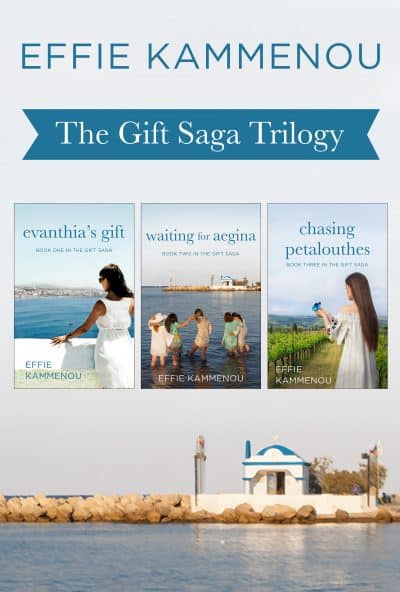 The Gift Saga Trilogy is now a complete set. 3 books—Evanthia’s Gift, Waiting for Aegina, Chasing Petalouthes—an homage to family, tradition, heritage, perseverance, and everlasting love in all its many forms. Love—unbinding, unbreakable, undeniable. Love is eternal.

In the year 1956, Anastacia finds herself pregnant and betrayed, fleeing from a bad marriage. With the love and support of her dear friends, Ana is able to face the challenges of single motherhood. Left with emotional wounds, she resists her growing affection for Alexandros, an old acquaintance. But his persistence and unconditional love for Ana and her child, Sophia, is eventually rewarded and his love is returned. In a misguided, but well-intentioned effort to protect the ones they love, both Ana and Alex keep secrets—ones that could threaten the delicate balance of their family.

The story continues in the 1970’s as Sophia attempts to negotiate between two cultures. Now Greek-American teenagers, Sophia and Dean, the boy with who she’s shared a special connection since childhood, become lovers. Sophia is shattered when Dean rebels against the pressure his father places on him to uphold his Greek heritage and hides his feelings for her. When he pulls away from his family, culture, and ultimately his love for her, Sophia is left with no choice but to find a life different from the one she’d hoped for.

Waiting for Aegina
Book two in The Gift Saga: The continuation of Evanthia’s Gift . . .

In 1961, five little girls moved into a suburban neighborhood and became inseparable, lifelong friends. They called themselves the “Honey Hill Girls,” named after the street on which they lived. As teenagers they shared one another’s ambitions and dreams, secrets and heartaches. Now, more than thirty years later, they remain devoted and loyal, supporting each other through triumphs and sorrows.

Evanthia’s Gift follows the life of Sophia Giannakos. In Waiting for Aegina, the saga continues from the perspectives of Sophia and her friends as the story drifts back and forth in time, filling in the gaps as the women grow to adulthood.

Naive teenage ideals are later challenged by harsh realities, as each of their lives takes unexpected turns. Now nearing their fiftieth year, Sophia, Demi, Amy, Mindy, and Donna stand together through life-altering obstacles while they try to regain the lighthearted optimism of their youth.

Chasing Petalouthes
The Gift Saga concludes with the next generation coming into the forefront of the story during their tumultuous years between adolescence and adulthood.

Evvie has lived through more tragedy than a young girl should ever endure, having lost both her father and a most beloved grandmother at a young age. Her rebellious ways are her only defense to mask the ever-present pain in her heart. Closing herself off emotionally, Evvie vows to never let anyone into her heart. But will her determination to keep everyone out see her lose the only person who could heal her broken soul?

Over-achieving, focused, talented, determined to succeed. Those are the traits Stella envies in her siblings and cousins. Her insecurities and lack of confidence stunts her ability to realize her own worth. When an older, handsome young man claims her as his own, Stella believes she has finally found who she has been looking for—someone to love her enough to mold her into the best version of herself. But has she fallen in love too quickly for a man she barely knows anything about?

Chasing Petalouthes (Chasing Butterflies) is the coming of age story of two flawed, young women who push their way out from the confines of the cocoons they’d built around themselves and discover how to soar.