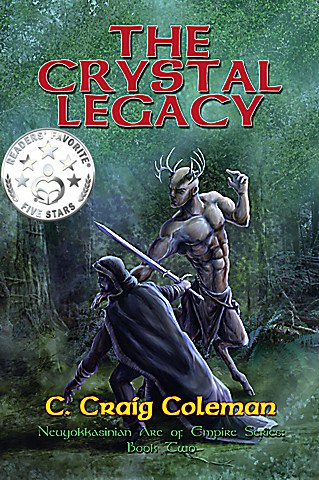 Prince Saxthor returns to the Neuyokkasin and undertakes an epic journey to retrieve the seven magic crystals of the Crown of Yensupov.

“Saxthor is struggling to lead his small band of allies in his quest to restore the Crown of Yensupov. As he comes into his own, he is faced with a multitude of challenges in a world that is increasingly being influenced by the Dark Lord of Dreaddrac. With the Witch Earwig lurking in the background, Saxthor must strive to be the hero and leader the entire world hopes he can be.

The Crystal Legacy, Volume 2 of the Neuyokkasinian Arc of Empire series, showcases the author’s tremendous growth in almost all aspects of fantasy writing. The first book of the series was already a good read – this one is exponentially better. The interactions between Saxthor and his growing circle of allies emphasizes not only his own individual progress, but also the distinct personalities and characteristics of every person he encounters. His gradual growth as a leader and as a hero is reflected by the way the people around him react to his presence. The dialogue is distinct, snarky and concise. The story flows from one quest to the next, all while maintaining a significant connection to the overall arc. The action is frenetic at times and each fight scene truly utilizes the potential of every character involved. Witch Earwig still manages to steal every scene she’s in, and her hand is still felt even though Saxthor is, for now, slightly beyond her grasp.

Magical creatures and spells play a significantly larger role in this book, a trend I hope will continue into the next part of the Neuyokkasinian Arc of Empire series. I can say that C. Craig Coleman’s growth as a writer mirrors Saxthor’s growth as a hero. As this fantasy world expands and as Saxthor encounters increasingly harder challenges, I have every confidence that the author will be able to deliver in the next book of the series. C. Craig Coleman is a fantasy author to keep an eye on, one that has all the potential to be a mainstay in this genre for years to come.” Eduardo Aduna for Readers’ Favorite