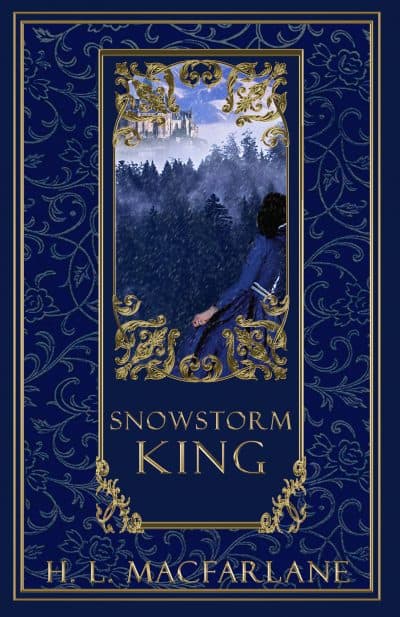 A cursed, reluctant king is desperate to escape the throne in a winter that never seems to end. Will a young woman scorned by her town be the key to his escape? Snowstorm King is a retelling of The Snow Queen!

What do you do when winter never ends?

Tempestuous, hedonistic Kilian Hale does not wish to be king. Only a curse cast by his father on his deathbed ties him to the throne until his elder brother, Gabriel, returns from war.

Spurned for not possessing the blonde hair and blue eyes of the people of Alder, Elina Brodeur seeks to win their approval by requesting an audience with their cruel, lazy king. But Kilian is not interested in the town’s pleas for extra provisions to help them through the particularly harsh winter, and time and again turns Elina away.

Yet the king soon discovers that he’s met his match in Elina, who strikes a deal with Kilian to get what she wants. But as provisions run low and tensions run high, Kilian struggles to get rid of the crown he never wanted whilst Elina tries to deny her growing feelings for the king she swore to hate.

The appearance of a pair of travelling magicians may just change everything . . .

Chronicles of Curses is a series of independent but interconnected fairy tale retellings that can largely be read in any order, though Snowstorm King is the preferred second in the series.