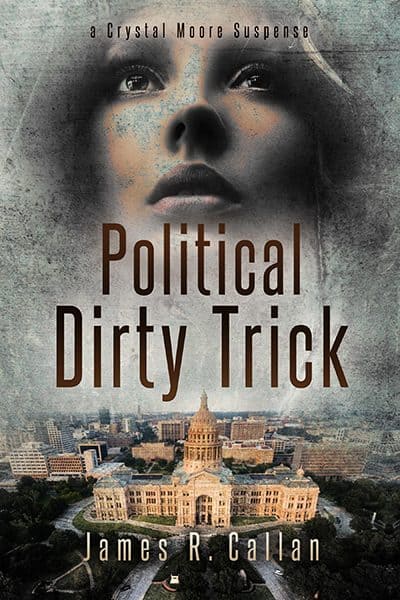 A political dirty trick goes awry, resulting in murders. Crystal looks for who’s responsible and save the election for her good friend. As she collects clues, she becomes the target. Now the question is not just whether Crystal can save the election. Can she stay alive?

Crystal Moore’s close friend Ron Drake is a shoo-in to win the governor’s race. Two workers in his opponent’s camp think that can be changed. A little dirty trick might swing votes away from Drake. But when no questionable activities by Drake can be found, the two workers create one. And what starts out as a move to swing some voters, end up with murders.

The pair steals a valuable painting from Drake, and puts it in a storage unit they rented under Drake’s name. But in the course of the theft, a man is killed in Drake’s home. There is no evidence against Drake, but fake news is leaked from the D.A.’s office to the media.

The effect is swift. Drake’s numbers in the polls plummet.

Crystal vows to find who stole the painting, who rented the storage under Drake’s name, who killed the man in Drake’s home, and who is leaking information to the media. As she begins to dig for clues, attacks are made on her life. Are the murders and art theft linked to the election?

On election day, Drake comes in second. But the election isn’t over yet, nor the attacks on Crystal. Will Drake win or be defeated by a political dirty trick? More important, will Crystal manage to stay alive?