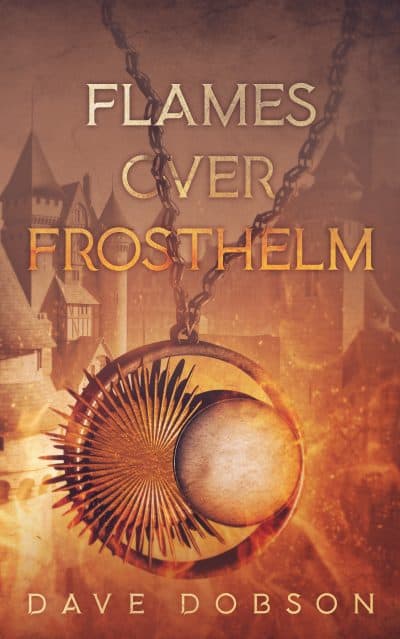 Marten and Boog are new provisional inspectors. Assigned a mundane case, they uncover a cult set on destruction. They earn the enmity of a noble, the Chief is bought off, and they are sentenced to die. Twice. In a race against prophecy, they face forces long buried.

Sometimes, your case takes a left turn. Or three or four. Marten Mingenstern and Boog Eggstrom are provisional inspectors, fresh out of Inquisitor’s Guild training and eager to prove themselves. Assigned the mundane task of tracking down stolen jewels, they instead uncover a mysterious cult set on destroying the city. After a thief explodes, they earn the enmity of a vicious noble, the Chief Inquisitor gets bought off and goes rogue, they are seized by barbarians, and they are sentenced to death at least a couple of times. In a final, frantic race with prophecy, they face ruthless fanatics, a city turned against them, and terrible forces long buried.

Flames over Frosthelm is the first novel about the Inquisitor's Guild, the investigative arm of the government of Frosthelm, a medieval city-state where criminals thrive, nobles scheme, and dark secrets lurk. Expect intrigue, mystery, swordplay, adventure, politics, romance, and the strong bonds of friendship. And a little magic along the way. Described as Princess Bride meets CSI, this new novel is a tale of classic adventure with a healthy dose of humor.