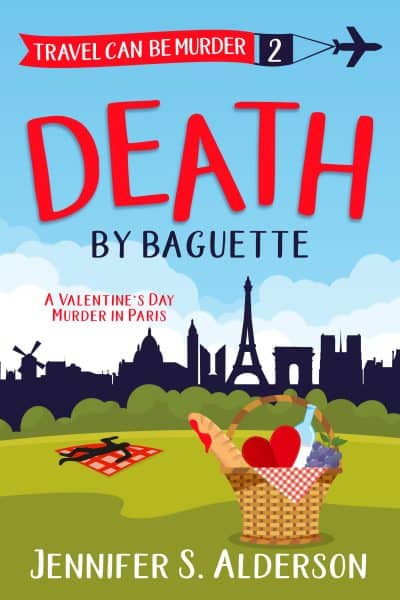 Death by Baguette: A Valentine’s Day Murder in Paris (Travel Can Be Murder Cozy Mysteries Book 2)

Paris—the city of love, lights . . . and murder? Join tour guide Lana Hansen as she escorts five couples on an unforgettable Valentine-themed vacation to France! Unfortunately, it will be the last trip for one passenger . . .

Paris—the city of love, lights . . . and murder? Join tour guide Lana Hansen as she escorts five couples on an unforgettable Valentine-themed vacation to France! Unfortunately, it will be the last trip for one passenger . . .

Lana Hansen’s future is looking bright. She has money in her bank account, a babysitter for her cat, and even a boyfriend. Regrettably she won’t get to celebrate Valentine’s Day with her new beau, Chad. Instead, she will be leading a lovers-only tour in France. Luckily for Lana, her best friend, Willow, and her partner, Jane, will be joining her.

Things go downhill when Lana’s new boyfriend shows up in Paris for her tour—with his wife. Chad is not the website developer he claimed to be, but a famous restaurant critic whose love of women rivals his passion for food.

After Chad drops dead during a picnic under the Eiffel Tower, a persistent French detective becomes convinced that he was poisoned. And the inspector’s sights are set on several members of the tour—including Lana!

While escorting her group through the cobblestone streets of Montmartre, the grand gardens of Versailles, and the historic Marché des Enfants Rouges market, Lana must figure out who really killed Chad before she has to say bonjour to prison and adieu to her freedom.