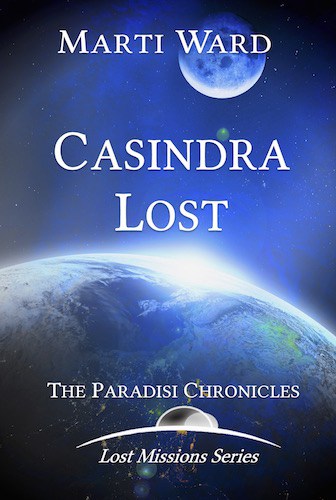 A 3.5 year mission from which they’ll never return, a 2.5 million lightyear journey to another galaxy, a 1.5 member crew comprising a solitary captain and a half-baked AI . . .

A 3.5 year mission from which they’ll never return, a 2.5 million lightyear journey to another galaxy, a 1.5 member crew comprising a solitary captain and a half-baked AI . . .

Captain Sideris is a loner and knows LETO ships like nobody else, having risen to command the Lunar-Earth construction fleet as they build ships to mine asteroids and colonize Mars. Suddenly, he finds the colonization effort is for another planet, in another galaxy, and he’s the sole human guinea pig being gated through a wormhole with an AI playing Noah to LETO SS Casindra’s ark.

Everything goes well as he starts to survey four planets they plan to exploit, as he gets to know emergent AI, “Al,” as he discovers he’s building a special relationship with empathic cat “Simba.” Problem is, message drones gated home are not being returned per protocol, with little explanation, no supplies, and some cryptic and disturbing messages.

This full length novel reminiscent of Clarke and Asimov is set in the multi-author multi-genre Paradisi universe. Casindra Lost opens the Lost Mission Series, which explains what happened to some of the early missions that underlie the various Paradisi colonization and post-colonization stories. Welcome to the Paradisi Chronicles . . .