In this tutorial, we will explore how to add drop caps to your ebook using the Jutoh software. For those of you who do not use Jutoh to format your ebooks, you'll find here some general pointers about the use of custom CSS, as well as some pitfalls you'll need to be aware of.

But first, what is Jutoh? It is software you can use to create ebooks in Epub and Kindle formats. I've used it to generate upwards of 80 books. You can read more about Jutoh here. And, if you are using Calibre, do yourself a favor—switch to Jutoh!

For this tutorial, I'm assuming you already have a Jutoh project ready, and that you now want to add some drop caps, probably with a custom font.

In this tutorial I'll also be using CinzelDecorative-Black, as I did in the custom fonts tutorial, but this time I'll rename the font "Family" to DropCaps. For an explanation of why I like to rename the font family to something consistent with its use within the project, see this post.

If you've decided to use a custom font, please check the font's "embeddability" rights. Just because you have the right to use the font in a printed document does not mean that you also have the right to embed it in an electronic document. When in doubt, check with the font owner.

On the Palette, which should be on the right-hand side of the Jutoh window, click the Styles tab, then click the drop down box toward the bottom of the palette window to select the character styles. Drop Caps should be listed in this window. If it is not, drop me a comment and I'll tell you how to create it from scratch. 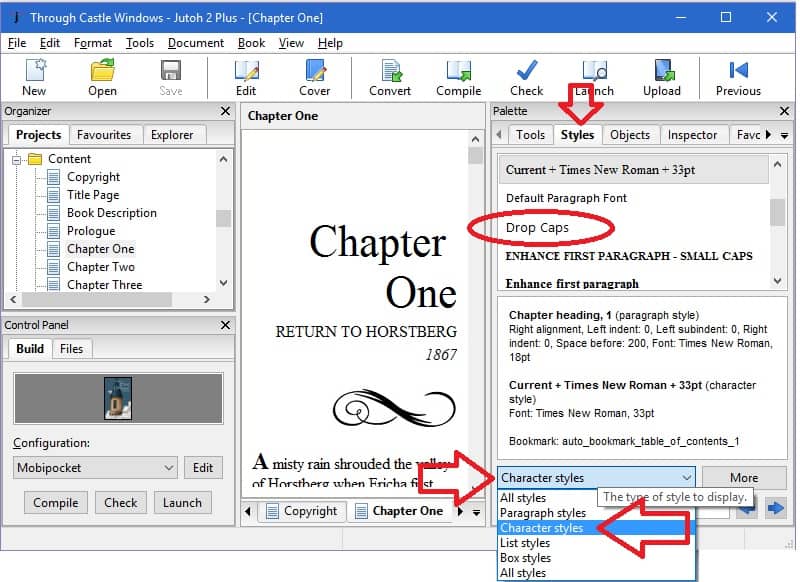 I've applied the default Drop Caps style to the first character of the first paragraph in chapter one of my book and compiled so I could show you here what it looks like. Note that the default style does not use custom fonts.

From this screenshot, I think you'll start to realize that there are pitfalls to using drop caps in your ebook. This is not a Jutoh problem; it will happen regardless of what software you use to create your ebook.

At this point you may want to use a custom font with your drop caps. To do this, you'll need to edit the style. Once you've located it on the Styles tab (as a reminder, the Styles tab is on the Palette, which should be on the right-hand side of the Jutoh window), right click on the style and select "Edit Style 'Drop Caps'" from the popup menu. On the edit window, click the "Advanced" tab, then the "Custom CSS" tab. 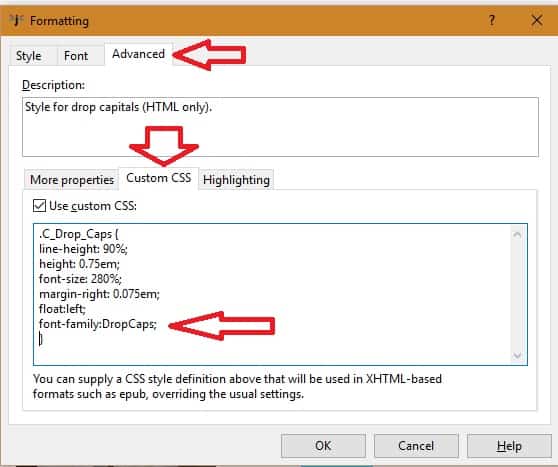 CSS stands for "Cascading Style Sheets" and is a language used for describing the look and formatting of a document written in a markup language, such as HTML. Every web page contains CSS instructions for your browser (IE, Chrome, Firefox, etc.), such as what fonts to use, whether the fonts are bold or italic, the size of the margins, the colors, etc. A good tutorial on CSS can be found here, and a comprehensive list of all CSS properties here, but we'll cover the properties that interest us down below.

For the drop caps style, ".C_Drop_Caps" is the selector. Jutoh assigns this name internally and you should not change it.

The instructions are made of a property name, followed by a colon, then the value(s) for the property. For example, the instruction font-family:DropCaps; says that the font family property is set to "DropCaps".

Here is a set of instructions that I used on a couple Kindle Worlds ebooks that I'm overall happy with, with links to an external site where you can learn more about that property. This example follows the pattern I outlined in the previous section: we first have a selector (.C_Drop_Caps), followed by an open bracket, then a list of additional instructions that are separated with semicolons, all of which is followed with a closing bracket.

But the biggest issue is the impossibility of guaranteeing a consistent look across all ereaders. This is because CSS support across ereaders is sketchy. You might think that if you can create CSS instructions that work well on a web page, then you should then be able to do the same for your ebook, since it also uses CSS to control the display. Unfortunately, that's not the case. For example, as you've noticed from the screenshots above, the Kindle DX ignores most of the instructions and simply displays a bold letter somewhat larger than the default.

Other devices might at least support the limited set of instructions we are using here, but don't seem to do it consistently. Part of that is because of the fonts surrounding the drop cap (the device's default font). They are different across devices, so they may have different line heights, different character spacing both on the horizontal and vertical axis, etc.

In other words, don't expect perfection. If your books are only available on one vendor, such as Amazon, it's not too much of a stretch to be able to make it look pretty close to what you want on the devices that support it. As you try to support more devices, though, you may find that  tweaking it again and again is not worth the trouble. But only you can make that decision.

If you found this information helpful, please share using the social media buttons to the left.

If you'd like to learn more about Book Cave author promotions or other tips for authors, please enter your email below and click the "Learn More" button to receive our author newsletter. 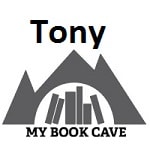 As a computer programmer, I tend to look at software applications from an engineer's perspective. So when I look at Twitter or Facebook, for example, I tend to see and understand things that the average user of those apps will probably miss.