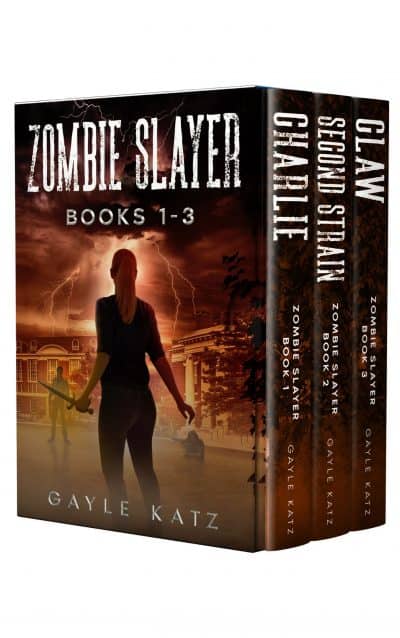 3 fast-paced, horror suspense adventures packed with zombie hordes, sassy slayers, and a touch of the supernatural

Charlie is so done with zombie slaying. After she moves across the country, she hopes to leave hunting behind and actually make some friends at her new high school. But the past she’d hoped to bury rises again with a fresh, city-wide outbreak.

Desperate to stop the walking dead, Charlie enlists the help of some classmates to find patient zero. But as the scourge spreads, her talents may not be enough to keep them alive.

Will Charlie discover the source of the infection, or will she meet a gruesome end?

Armed with daggers and a little help from the supernatural, Charlie and her zombie-slaying team thwarted the previous outbreak. Now another strain has been unleashed on the population, infecting unsuspecting people in strange and unusual ways.

To save their city from a devastating infestation, they must hatch a plan to catch the crazy group responsible before more innocents are attacked and succumb to the deadly virus.

Can Charlie and her team destroy the new virus before the city is overrun by the undead or will the zombie leader slip through their fingers?

As manufactured zombie outbreaks surge in Portland, Seattle’s zombie infestation is resurfacing. To battle the undead on two fronts, Charlie and her team are split up to handle the creepy disturbances. Her path leads north in search of an ancient zombie leader while her team tackles the outbreaks in the city.

To battle the plague upon humanity, the slayers must think on their feet and adapt quickly. But as the danger escalates and things get out of hand, not even magic spells can save them. With their fates intertwined, Charlie and her team suffer a devastating loss, one they might never recover from.

Can Charlie and her team defeat the magical zombie leader and corrupt characters out to devastate the city? Or will one of their own be lured to the dark side?

If you like sassy heroines, flesh-eating walkers, and stories that keep you guessing, check out a sample or buy the trilogy now!