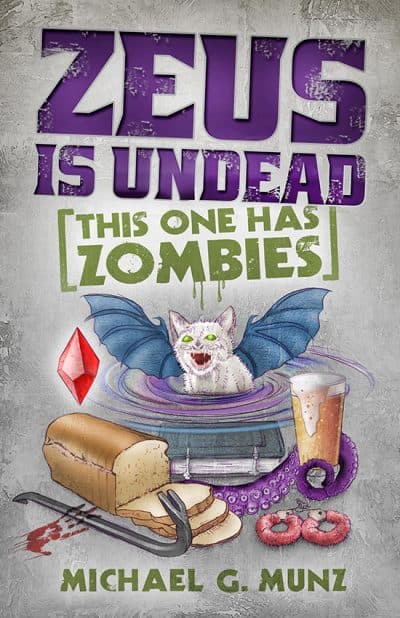 Zeus Is Undead: This One Has Zombies (Zeus Is Dead Book 2)

Outstanding Humor Winner: 2019 Independent Author Network Book of the Year Awards. Sometimes all a fallen goddess needs to regain her power is a trusty sword and a worldwide zombie apocalypse . . .

The gods are back. Again. Also, zombies.

Sometimes all a fallen goddess needs to regain her power is a trusty sword and a worldwide zombie apocalypse . . .

Athena’s had a rough eighteen months. Formerly the goddess of wisdom, battle, and crafts, her divinity has been revoked. Zeus no longer trusts her, and a 7-foot ice cream sundae has usurped her position as his bodyguard. But when the dead start rising from the grave without authorization, things start looking up. What better way to prove her worth to Zeus than to solve the zombie problem?

Even so, it sure as Hades won’t be easy. No one knows why the dead are rising, why Zeus can’t eradicate them, nor why Australia remains zombie-free. Meanwhile, the Goddess of Strife is treating Athena like a chew toy. Worse, Leif and Tracy, two mortals whom the Muses insist be involved, refuse to help. If Athena can’t smack some sense into the situation, she may well become undead herself! (Also, global zombie domination, mortal extinction, no more football, et cetera. Bad stuff.)

At long last, it’s a hilarious return to the irreverent, award-winning fantasy world of Zeus Is Dead. Greek gods in the 21st century meet brain-munching cadavers in Zeus Is Undead: This One Has Zombies!