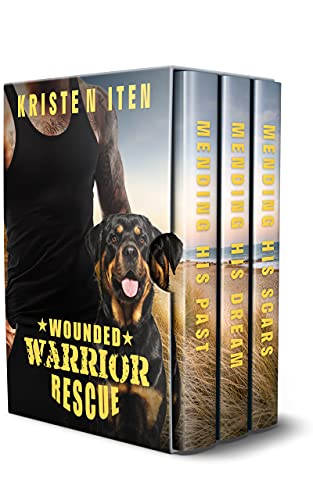 Ex-military men, the women they love, and the rescue dogs who need them come together in the small seaside town of Liberty Cove, where there is more than enough love to go around and happy endings are not optional.

This collection is for fans of Hallmark-style, second-chance, slow burn romance. Fall in love with the veterans and dogs of the Wounded Warrior Rescue as a match-making boss helps them rediscover love they thought was lost forever.

Mending His Past
Trent joined the army ten years ago to escape an overbearing father, leaving his first love behind in the process. Now, he’s home and having a hard time settling into civilian life. He’ll have to make amends with the woman he left and a father who claims to have changed if he wants to move forward with his life. But sometimes it’s even harder to accept forgiveness than it is to forgive.

Mending His Dream
Levi left his hometown for the Air Force—a place where character, not money, earns respect. When family duty calls him home, old insecurities from his meager upbringing roar back to life. Sparks fly when his old flame starts working with him at the rescue, but if he can’t get over his own past, he’ll risk pushing her away—just like he did the first time.

Mending His Scars
Jax lost more than his leg to an explosion while deployed overseas. His relationship with the woman he saved from a band of terrorists couldn’t weather the emotional fallout. His fierce need for independence drove away the only woman he ever loved. Now that she’s in town, he’ll have to stop butting heads with her long enough to see if she’s willing to give him a second chance.

Ex-military men, the women they love, and the rescue dogs who need them come together in the small seaside town of Liberty Cove, where there is more than enough love to go around and happy endings are not optional.