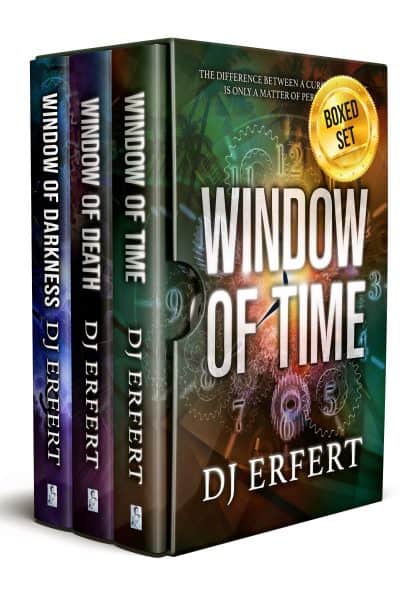 The difference between a gift and a curse is only a matter of perspective. Grab all three books in the Window of Time trilogy today!

CIA courier Lucy James never gets used to seeing innocent people killed, but she copes with it—every day. Cursed with the ability to glimpse into the future when a death is about to happen, she has a short window of time to interfere—risking her life in order to change it. No one knows about her curse, until she saves a handsome Los Angeles firefighter trapped between her and foreign operatives hell-bent on intercepting her current assignment.

CIA Agent Lucy James’s undercover reentry into the US doesn’t go as planned. The human coyote smuggling her and more than a dozen illegal aliens across the southern border into Arizona abandons them. Their group scatters. But Lucy is soon rescued by two US Border Patrol agents. After they hear shots fired in the distance, the hope of finding the others alive plummet. Ruthless border bandits methodically track and kill the illegals for the contraband-filled backpacks each man carries.

When Lucy has a premonition—a window into the future—she sees one of the agents killed by the same bandits. She must gain their trust in time to stop the bandits from continuing their murder spree and find the missing backpacks containing the deadly packages before the US has its first mass terrorist attack since 9-11.

The difference between a gift and a curse is only a matter of perspective.

To Lucy Cartwright, a glimpse into the future means a chance to save innocent people from an untimely death to live another day—or for a lifetime. In her eyes, it’s a true gift. Her uncle has a different way of looking at the ability he shares with his niece. To him, it’s a curse that tortures his soul so badly he wants to die. It drives him insane. But when he wants to stop Lucy’s curse by ending her life, she has to hunt him down before he finds her first.