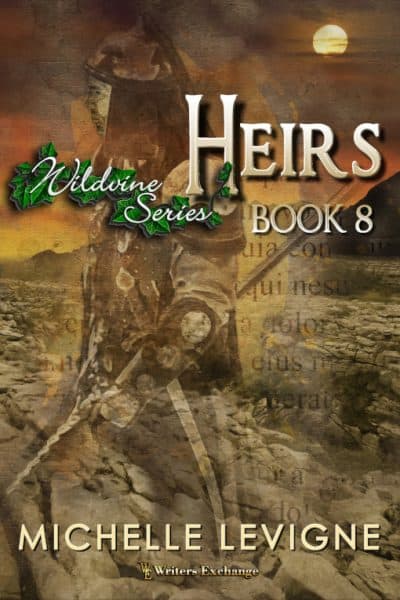 Wildvine County, somewhere in the United States, is that pivotal point where the travelers from multiple worlds and universes meet . . .

In multiple worlds, universes and dimensions of reality, there are tales of Hub Worlds, where many different realms can meet and intersect. Some travel between worlds through the power of the mind and Talents born into the blood, while others are chosen through vision and prophecy and step between worlds with the power of talismans. None can go to the others’ worlds, except when they meet in a Hub World.

Wildvine County, somewhere in the United States, is that pivotal point where the travelers from multiple worlds and universes meet . . .

Two Wildvine Series novellas in one volume, including:

Heirs Apparent: The people of Rehdonna are no safer on Earth than they were on their homeworld. The Future of Man is determined to get their hands on the children of Bree Kirstan-Reed and Daniel Harland and use them in their quest to rule the world of the future. When an attempted kidnapping goes horribly wrong, Bree and Aravin, and Daniel and Wren trust their children to Jori Lawrence, sending them through the doorway of Old Solar’s Shoppe. Unfortunately, even in the Midworld, guarded by magic, there are other enemies waiting to attack…and other children in danger.

Filar: Having graduated from college early, Johnny Harland isn’t quite ready to settle into his duties as heir of the Felin-ru Clan. When his grandmother suggests a journey as a time of transition into adulthood, to “prove” himself, Johnny eagerly accepts the idea and sets off on a cross-country journey. His quest for personal understanding leads to finding a homeless boy named Clayton D’Arnot, who is Johnny’s “filar” or spirit-brother. Clayton has seen more and proven himself stronger than Johnny can even imagine. As he earns his filar’s friendship and trust, the two forge a bond of partnership that will help them lead the exiles into the future, and resolve the war for the safety of Rehdonna.