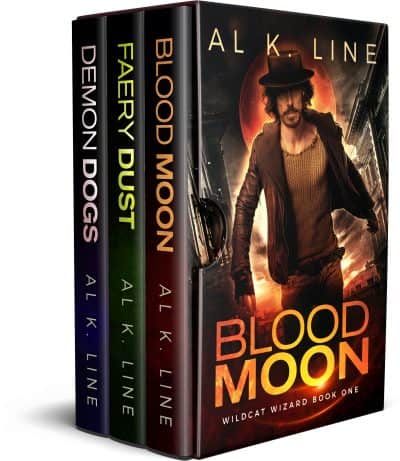 Meet Arthur “The Hat” Salzman. Gangster. Wizard. Screwed. When I was killed for the fifth time, and before breakfast, I knew for sure I’d made a terrible mistake. Soon, every gangster, spook, and magic abuser in the city wanted what I had. Over 150 positive reviews on the individual books!

Blood Moon
When I was killed for the fifth time, and before breakfast, I knew for sure I’d made a terrible mistake.

It was meant to be a simple job. Steal item, deliver said item to my posh broker, get paid. Easy peasy wizard squeezy.

Blame it on the insomnia, my own greed, or maybe just stupidity, but I swear on my wand I didn’t know what was in the bag. If I had, I’d never have got involved.

Soon, every gangster, spook, and magic abuser in the city wanted what I had. But they went too far, broke the Code. Backed up by my faery godmother, and a Stepford mom who’s main goal in life was to be my sidekick, the body count escalated as the truth was revealed. And they all forgot one important thing.

The Hat’s a goddamn Wildcat Wizard!

Faery Dust
Okay, so an elf blasted his way into my kitchen and it resulted in me killing a man in the nastiest of ways, but that’s an occupational hazard. Good news? I had a job, and it was a doozy.

It was time to go steal a magical belt, the infamous Ræth Næg. That wasn’t the best part, though. Yeah, that’s right, I got to wear my ninja slippers

But nothing was as it seemed, and elves were not to be trusted. Plus, there was the small issue of the million dollars. Oh, and the Hounds, and Vicky, who was doing my head in, and the vampires, and . . . You’ll just have to read the damn book to find out the rest.

Demon Dogs
I’d killed four men in the morning, and by the afternoon things had become seriously out of hand. But the portal was moved and I could rest easy. Or so I thought.

Time for a family dinner and a nice smoke. Alas, it was not to be. Enter one very powerful vampire, gangster supremo, and unhappy camper.

He had a job for me, but I told him I didn’t do missing persons. I stole things for a living, not detective work. Ivan wouldn’t take no for an answer though, and that’s when the real trouble started.

Still saddled with a neurotic soccer mom who seemed immune to the danger, and with issues way beyond my ability to deal with, we enter the dark, seedy underbelly of the criminal world. What we discover will change our lives forever, and not in a good way.

Is there no end to the wickedness of man? Apparently not.