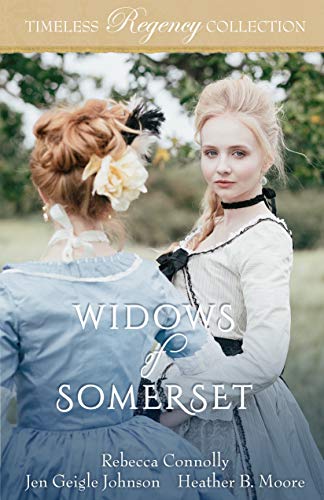 Rules of the Secret Society of Young Widows: Rule 1: Be a widow. Rule 2: Have an impeccable reputation. Rule 3: Don’t fall in love again.

Rules of the Secret Society of Young Widows:
Rule 1: Be a widow.
Rule 2: Have an impeccable reputation.
Rule 3: Don’t fall in love again.

An Heir to Spare by Rebecca Connolly
Widowhood has changed much for Anna—Lady Lyndham—but an unconventional heir to the estate was not something she had anticipated. Nor had she anticipated that he would have no intention of forcing her out, although he has every right to. And she certainly did not anticipate finding him handsome, charming, and unfailingly generous. But Ned Richards, the new Lord Lyndham, has a world of surprises in store for her, and not anticipating them will become quite the adventure.

The Widow of Lavender Cottage by Jen Geigle Johnson
As a widow, Lillian Hunter has never been in love and plans to never marry again, so the rules of the Secret Society of Young Widows suit her just fine. Her days are spent attempting to transform her newly inherited Lavender Cottage into a livable space until Oliver Wentworth shows up, asking for her late husband.

Anxious to establish himself as a landed gentry in Somerset, Oliver is none too pleased to discover that a widow lives alone in a tiny run down cottage bordering his new property. The fact that she’s young and attractive only adds frustration to his sense of responsibility over her. And confound her, she challenges his every attempt to help manage her affairs.