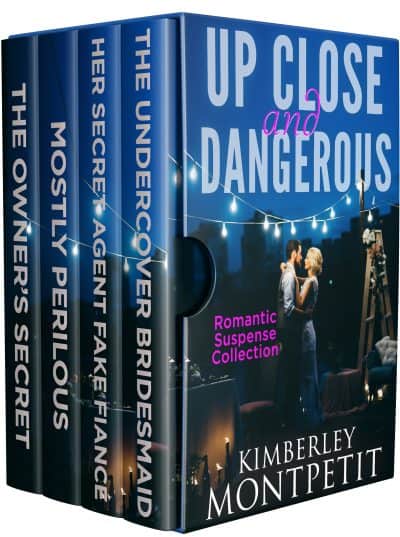 Escape into a world of intrigue and swoony romance with these four romantic and suspenseful novels! Fall in love with unique heroines and their gorgeous men, paired with up close and dangerous romantic banter, family secrets galore, and spine-tingling goosebumps.

The Undercover Bridesmaid
Chloe Romano trains hard to become a good FBI Agent even though she fights a deep attraction to her team leader, the gorgeous Liam Esposito. Fraternizing with her boss is strictly forbidden, so their feelings have to remain a secret longing. When an FBI sting operation goes horribly wrong, Chloe’s love for Liam becomes tangled in grief and lies when she learns that he was the one that left her best friend behind to die.

Her Secret Agent Fake Fiancé
Can two clashing agents survive gunshots, murderous millionaires, and dangerous covert snooping? Most importantly, will their own hearts betray them in the end?

Fall in love with romantic suspense that includes a stolen Faberge Egg, intrigue, and danger—all wrapped up in a red Christmas bow!

Mostly Perilous: The Women of Ambrose Estate
Emma Ambrose purposely stays away from her family’s Texas oil estate, throwing herself into her work as an archeologist in the tombs of Egypt. Ancient mummies are infinitely safer than the family curse that follows the Ambrose Estate heiress. A curse that dooms her to never finding love, because it means certain death for any man who falls in love with her. Can she choose between the handsome Egyptian Omar Mostafa, or Texas county coroner, Ian Phelps? Both men are hiding secrets that could change Emma’s life—and the family graveyard is hiding the biggest secret of all.

The Owner’s Secret: A Secret Billionaire Romance
A brutal storm. A cryptic message. A life changed . . . forever. Melody’s cozy New Orleans bookstore is her pride and joy—until a violent hurricane sweeps it all away. Forced to flee the storm by boat with her ailing grandmother, she wonders how she will ever pick up the pieces of this disaster, especially when she meets the enigmatic Britt Mandeville, caretaker of the gorgeous and haunting White Castle mansion whose got secrets of his own.