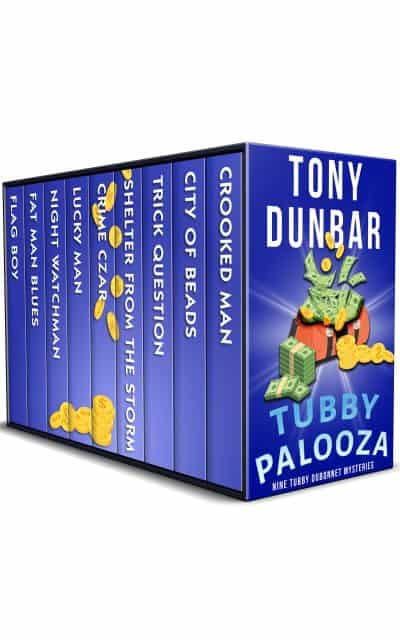 Murder in the Big Sleazy: Destination crime fiction with a heaping dose of Étouffée. Grab this box set of 9 bestselling crime thrillers today!

Crooked Man
Meet lawyer Tubby Dubonnet. His clients are all renegades from the asylum (a.k.a. Orleans Parish), including Darryl Alvarez, the manager of a local nightclub who’s been caught unloading marijuana from a shrimp boat. At their first meeting, Darryl entrusts Tubby with an ordinary-looking, blue gym bag . . . of money. What could possibly go wrong?

City of Beads
Tubby Dubonnet is bored. Sure, researching licensing law for the new casino will keep trout meunière on the table, but what could be more tedious? (Unless, of course, the client’s dealings are steeped in conspiracy).

Shelter from the Storm
To out-of-town kingpin Willie LaRue, Mardi Gras seems the perfect time for a New Orleans heist. Parties, parades, chaos, alcohol—who could be concerned about a little thing like a bank job? Indeed, all might have gone well except for an out-of-season frog-flogger that threatens to flood the French Quarter.

Crime Czar
Tubby can’t forget the last words that escaped an old friend’s lips, and he can’t get out of the way of a political campaign that’s turning rough. Obsessed with the idea that a shadowy crime boss may be pulling the strings that have cost good people their lives, Tubby is entering into a test of courage with the most violent men in New Orleans.

Lucky Man
It’s a city of sin. And murder is only one of them. So what if Judge Hughes shared a few special moments with Sultana Patel—why is this a matter of public interest? Until the D.A. hatches a plot to ensnare them—and their lawyer Tubby. And what a web they’re ensnared in!

Night Watchman
When in the 1970s a young war protester is killed in broad daylight on Canal Street, it appears that his murder will be forgotten. But a youthful Tubby chanced to see it happen, and the tragic event’s haunted him throughout his life. Decades later, Tubby decides to conduct his own investigation. And stirs up a hornets’ nest.

Fat Man Blues
Ex-con Angelo Spooner is trying to start a legit business, but he just can’t catch a break. Just as his healing Holy Water, “Angelo’s Elixir,” is about to go upscale, the sticky strands of the Big Sleazy’s tangled web of crime and corruption come running. What’s a law-abiding parolee to do? Hire Tubby Dubonnet, of course!

Flag Boy
The set-up alone’s enough to make you believe in the butterfly effect. Two acrobats burglarize a house; a sultan moves into a French Quarter mansion; a Mardi Gras Indian, in the wrong place at the wrong time, is wrongfully arrested; and our hero Tubby Dubonnet comes upon a double murder while paying a social call on the bayou.