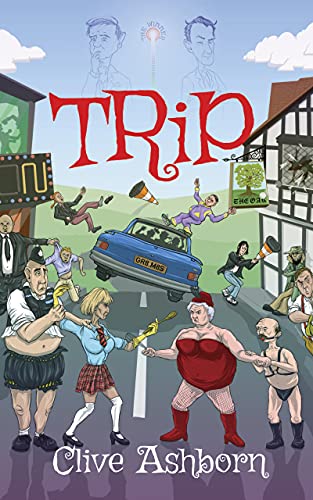 Trip: A humorous adventure about angels, demons, drugs, sex, the origins of the universe and what happens when we pass on.

The destiny of the universe! Eternity can be tedious so, ethereal beings, Alf and Ome, play a game, to decide the supremacy of good or evil. While, back on earth, a motley crew of mates has no idea their debauched weekend romp is being finagled by otherworldly beings.

“A brilliant debut novel from a fine mind and an exemplary storyteller.” —Enzo Cilenti, Game of Thrones, Guardians of the Galaxy

The stakes couldn’t be higher: the destiny of the universe!

Eddie, slacker extraordinaire, and his best friend, the permanently “resting” actor Justin, have never really bothered with life’s big questions. They’re too busy down the pub quaffing pints. But when they visit their mate in a small town in the north of England, ready to have yet another bloody good time, things take a surprising turn. Two ethereal beings, Alf and Ome, make Eddie the focus of a game to decide the supremacy of good or evil, once and for all. However, when Alf and Ome fail to play by their own rules, all-out war is declared, and Eddie and Justin are transported to the metaphysical world of Alf and Ome, where Eddie uncovers their hidden truth and the tables are turned.

All of this happens over the course of a weekend when the two friends, buffeted by supernatural forces, inadvertently trigger a plague, a major police operation, and a chaste wife’s conversion from once-a-year-anniversary-sex-in-the-dark to BDSM aficionado. A marigold glove goes where no rubber glove has ever gone before, and a local man finds out what it’s like to have 50,000 volts sent down his meat and two veg. But upsetting the local bad lads and lasses, as well as sending a woman with Tourette’s on a hallucinogenic mushroom trip, is the least of it. Eddie and Justin witness the waters of a levy part, the destruction of thousands of pounds worth of illegal pornography, and the creation of a new universe.

This bawdy tale will have you laughing out loud as it weaves multiple subplots that climax in a satisfying denouement unlocking the secrets that physicists, philosophers, and cooks have failed to uncover: What made the Big Bang bang, where do we go after we die, and how do we make Coq O’Noodle Do?

“Clive Ashborn’s Trip, is a wild romp that follows two post-life beings who are trying to make eternity a little more interesting. The pair’s meddling in the lives of a few blokes in modern-day England begets unpredictable—and funny—results.

Anyone unafraid of a little sex, drugs, and rock and roll will find plenty of fun in this tale that is unbounded by the restraints of overly-polite society. And Ashborn’s fresh and imaginative take on a possible afterlife will entertain religious skeptics and believers alike.” —James Underdown, Executive Director of the Center for Inquiry Los Angeles & Founder of the Center for Inquiry Investigations Group