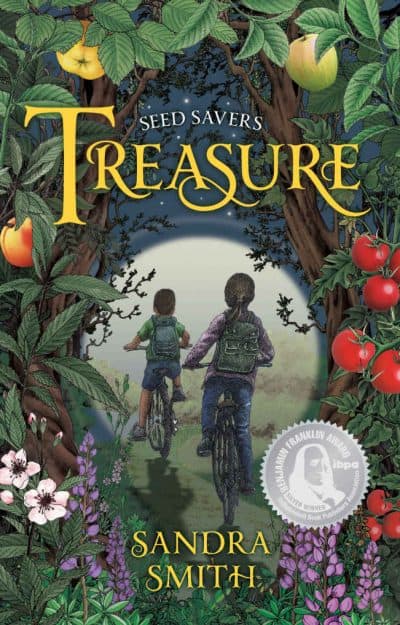 It was only a tomato plant, but it was highly illegal. With their mom mistakenly jailed on account of their tomato plant, siblings Clare and Dante must decide what to do next in this futuristic tale where the food supply is limited and Big Brother is always watching.

Two kids, two bikes, and an idea they can change their world.

It’s 2077. There’s no apocalypse, but some things are different. Things like the weather, the internet, and food. In Clare’s world, blueberry is just a flavor and apples are found only in fairy tales.

Then one day Clare meets an old woman who teaches her about seeds and real food. The woman (Ana) tempts Clare with the notion that food exists other than the square, packaged food she has always known. With Ana’s guidance, Clare and her friends learn about seeds and gardening despite suspicions that such actions are illegal.

When the authorities discover the children’s forbidden tomato plant and arrest their mother, Clare and her brother flee. Clare has heard of a place called “The Garden State,” and with their bikes, a little money, and backpacks, the children begin a lonely cross-country journey that tests them both physically and spiritually. Will they succeed in their quest to find a place of food freedom? And can they, only children, help change the world?

Treasure is a gentle dystopian, frightening only is the possibility that we may not be far from the future it paints. First in a five book series.