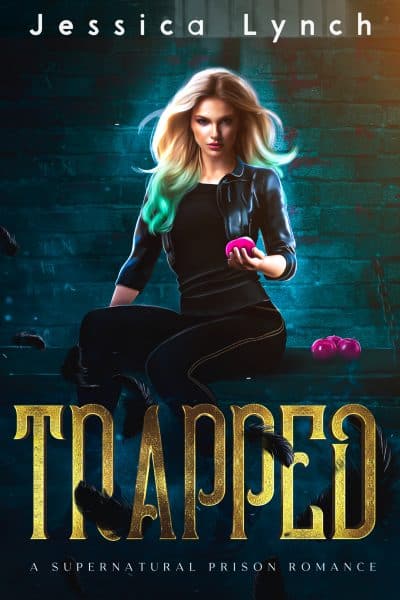 Trapped (Imprisoned by the Fae Book 1)

After rejecting a noble’s advances, human Elle is locked away in a faerie prison, surrounded by fae men—and stuck in a cell with Rys, a Light Fae. As she becomes swept up in Rys’s plan to break free, he might just steal her heart . . .

When I refused the attentions of a Seelie noble, I earned myself a one-way ticket to Siúcra, the most infamous prison in the Fae Queen’s Court.

I’m still reeling over the fact that the fae are real. That Faerie is a real place, and that there are real consequences to being a human surrounded by the amazingly gorgeous—if also amazingly heartless—creatures in this world.

Their cruelty doesn’t stop after I’m captured. Turns out, I’m the only human in my wing of the prison. And, I find out pretty quickly, the only female.

Thank goodness for Rys. He might not be the friendliest cellmate, but so long as I don’t ask him questions about why he’s locked up, he’s willing to watch my back. Know what? That totally works for me, especially since I can’t seem to keep my eyes off of his.

I’m in jail. Falling for another prisoner should be the last thing on my mind. Then again, Rys is a Light Fae. A Seelie. He’s one of them. Sure, he might be stuck here with me now, but he used to guard this place. He knows the way out—he just doesn’t want to leave.

He’s got a past. One look at the ragged scar ruining his otherwise perfect fae features and even I can tell that he’s not as innocent as he claims. But no matter how hard I try to get him to see things my way, he refuses to get involved.

Just like he refuses to admit that he can sense the crazy attraction brewing between us.

It started out as protection before it blossomed into something . . . more, whether he wants to pretend or not. And when he finally decides it’s time for him to break free, I know I’ll do whatever I must to make sure that he takes me with him.