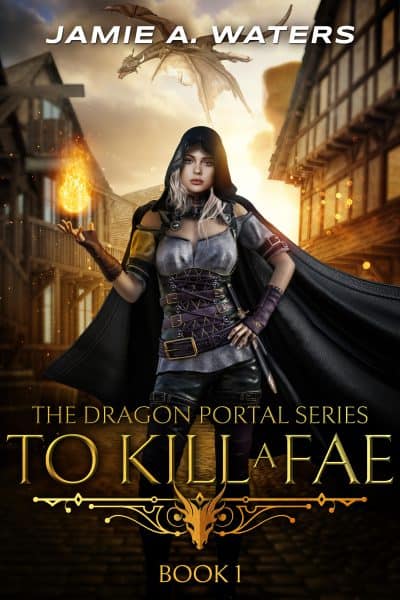 To Kill a Fae (The Dragon Portal Book 1)

by: Jamie A. Waters

Sabine has spent the last decade hiding from the fae and the Wild Hunt. But when a charismatic stranger recruits her to retrieve an invaluable artifact, she’ll have to finally reveal her identity . . . and her dark secrets.

Marked for death, Sabine escaped from her home more than ten years ago.

But the Wild Hunt will never give up.

It should have been easy to stay hidden. All Sabine had to do was keep her head down, avoid telling anyone about her past, and above all else, not let her glamour drop.

When a charismatic stranger arrives in the city, Sabine finds herself unwittingly drawn to the power she can sense hidden within him. Keeping her distance is nearly impossible, especially after a life debt is called due and she’s tasked into helping steal a rare artifact.

Sabine is the only one who can break the magical barriers protecting the item, but that means revealing the truth about her identity and exposing her darkest secrets.

Unfortunately, the Fae aren’t the only ones hunting her.

And the most dangerous monsters aren’t always confined to the dark.

“Heart pounding action, plots within plots, and unexpected twists abound in To Kill a Fae by Jamie A. Waters. Fans of books like ACOTR, Six of Crows, and A Curse so Dark and Lonely will enjoy this book.” –Amazon Reviewer