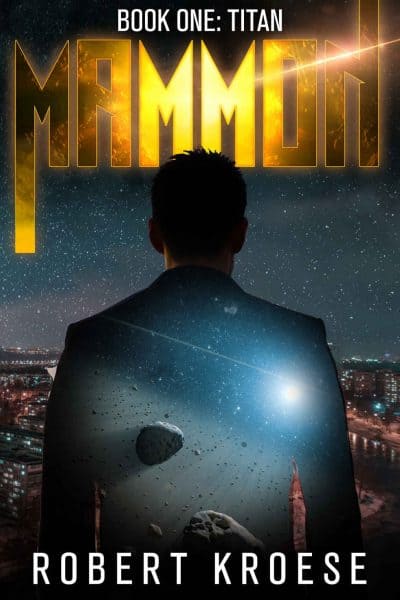 An asteroid containing $3 trillion in precious metals. A government on the brink of insolvency. An entrepreneur with an audacious plan. Will he save the world? Or doom it to a fiery apocalypse?

By the year 2032, the U.S. federal debt has surpassed $50 trillion. The American empire is on the verge of collapse.

An entrepreneur has an idea for rescuing the debt-ridden United States: the government will issue stock in a company with exclusive mining rights to an asteroid whose orbit will soon bring it near Earth. The asteroid, which contains $10 trillion in valuable minerals, is officially called 2015 RK 16 Maimonides, but it soon comes to be known by another name: Mammon.

Fortunes are made and America seems to have avoided an economic collapse. But when the plan to capture the asteroid goes awry, the sky will fall . . .

“This is a compelling page turner and, once again, Kroese demonstrates how thorough is the research behind these yarns. He not only gets the economics of hyperinflation absolutely correct, but, in the best tradition of science fiction, ‘shows, not tells’ the psychology which grips those experiencing it and how rapidly the thin veneer of civilization can erode when money dies.” —John Walker, Founder of Autodesk, Inc., co-author of AutoCAD, author of The Hacker’s Diet, operator of Fourmilab

“You can see the foundation of the book’s apocalypse in today’s headlines, and that should scare . . . anyone. Cannot wait for book two.” —T. Cannon, Amazon reviewer