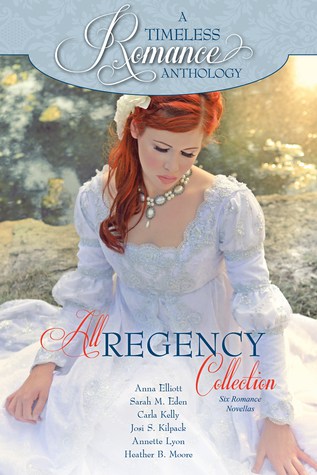 The Wedding Gift: A Pride and Prejudice Story by Anna Elliott

It is two weeks before Elizabeth Bennet’s wedding to Mr. Darcy. He has given her the perfect wedding gift, and now she must come up with one for him.

Dream of a Glorious Season by Sarah M. Eden

Elizabeth Gillerford envies her sister only one thing—that she’s been intended for Julian Broadwood since they were children. The trouble is that Elizabeth is hopelessly in love with Julian too.

The Mender by Carla Kelly

Thankful Winnings takes a sea voyage with her cousin on the Ann Alexander, in a last adventure before she settles down to marry one of her beaus. Unexpectedly, they come upon the aftermath of a fierce ship battle, and Thankful is commissioned to help in the place of an injured surgeon on one of the Royal Navy ships.

Regina Weathers gives up on marrying for love the day that Ross Martin walks out of her life. Now, fifteen years later, Ross shows up at a ball and thinks he can woo Regina. But she is set on her lonely path and stitched-up heart, no matter the excuse Ross gives for his years of silence and neglect.

The Affair at Wildemoore by Annette Lyon

Mrs. Ellen Stanhope escorts her three daughters to a ball. As her oldest flirts with a beau, Ellen is reminded of her courtship and early years of marriage with Anthony, before tragedy struck with the death of their infant son.

The Duke’s Brother by Heather B. Moore

Mr. Gregory Clark is having an awful day, and it only gets worse when he’s ran over by . . . a woman.