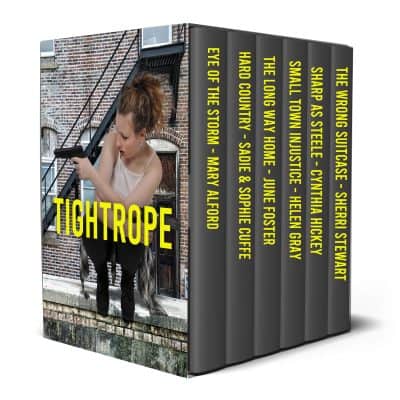 Eye of the Storm
Running into Deputy Sheriff Brady Connors, Kate finds herself attracted to the handsome frontier lawman right away, but having a future is not possible while the enemy is still stalking her.

With Brady’s help, Kate is about to face the showdown she’s been expecting for a long time, when the enemy coming after her proves to be closer than Kate could ever imagine.

Hard Country
Is blood thicker than West Texas dust? Johnny’s broken his sister’s heart too many times to count, but with one tug of her heartstrings, CJ braves Texas heat in a last-ditch effort to save big brother. When Yankee stubbornness butts heads with cowboy arrogance, CJ has a better chance getting answers from her horse than the men on the ranch. She knows she’s rubbing elbows with a murderer. She’s in over her head, and the bodies are adding up. Will she be next?

The Long Way Home
A kidnapping and vicious murder leave David Maguire and Jada Atwood with few options: remain in the clutches of their abductors or attempt an escape. But the attraction they discover for each other could change their lives. Will they find their way home or die in a Pennsylvania forest?

Small Town Injustice
Brody has known love, and the loss of that love through death. He can’t risk another such loss. He doesn’t count on the lovely cop who sends his heart into a tailspin.

Can these two find justice for their murdered friend, conquer their fear of loving again and have a happily ever after together?

Sharp as Steele
A too handsome for his own good private investigator. A stalker who claims she is his. A new job turns deadly. A final confrontation could end it all.

Can Lana and Lance outrun a man filled with an insane desire to claim Lana as his own?

The Wrong Suitcase
Regina Larson cannot believe she’s finally in Israel after years of saving for this trip. She can’t wait to walk in the footsteps of the biblical heroes she’s read about all her life. Now places like the Sea of Galilee and the Dead Sea won’t just be words on a page. And what better place to receive God’s calling than Israel? Reggie feels sure God will meet her here. But when she discovers that she’s grabbed the wrong suitcase at the airport, and the owner of the bag accuses her of stealing something of value from it, this trip of a lifetime—this pilgrimage—becomes a race for her life.