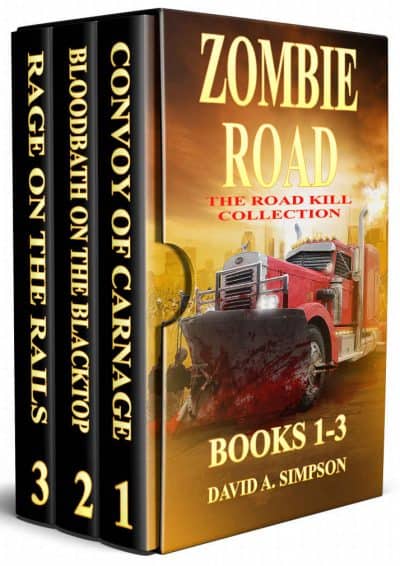 by: David A. Simpson

Get the Zombie Road boxed set featuring the first three books in the award winning Zombie Road Series for over 1100 pages of action-packed post-apocalyptic fiction.

Convoy of Carnage
They weren’t heroes. They were everyday people. Gunny, truck driver and former veteran, is minding his own business over a cup of coffee at the Three Flags Truck Stop when all hell breaks loose.

Bloodbath on the Blacktop
The people that tried to kill the world almost succeeded. They were ruthless but didn’t take into account the vets, truckers, and two-fisted fighters who didn’t know the meaning of surrender.

Rage on the Rails
It’s hard to stop a hundred thousand pounds of diesel locomotive. It’s been a month since the outbreak, and the survivors of the zombie apocalypse have started a new life in a walled city, but those caught on the outside aren’t so lucky. Gunny and his crew mount a rescue mission using the only thing that stands a chance of cutting through the undead hordes: An armored train.

If you’re looking for an apocalyptic thrill ride filled with everyday people, heroes, villains and a dog named Bob, then look no further. Full of thought-provoking ideas that cover uncharted territory in post-apocalyptic fiction, this series will keep you rooting for the good guys, despising the bad and turning the pages until the very end.