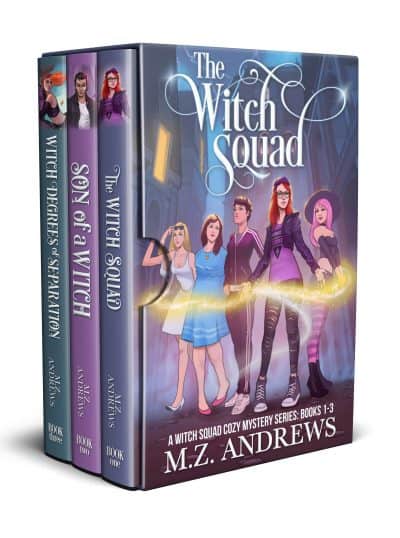 Murder, mystery, and magic! A ragtag group of witches discover a young woman dead on their first day of witch college. Thrown headfirst into a murder investigation, the women are forced into an unlikely friendship while trying to find a killer before he strikes again.

The Witch Squad
Nineteen-year-old Mercy Habernackle is a witch gone off the rails. Causing problems with the law in her hometown, she’s faced with two options. Go to a correctional institution or get shipped off to witch boarding school, or as her mother prefers to call it, finishing school. Choosing the latter, Mercy’s mother, Linda, drives her daughter cross-country to the Paranormal Institute for Witches, situated high in the beautiful Appalachian Mountains in cozy, Aspen Falls, Pennsylvania.

Upon arrival, Mercy is faced with cheerful smiles, friendly people, and a sticky sweet roommate who has turned their dorm room into an advertisement for the Pottery Barn. Mercy had hoped her fellow witches would be more like her, dark, dreary, and a little bit self-destructive.

When the murder of a local teenager takes place on the first day of class, Sorceress Stone, headmistress of the college for wayward witches, takes the class on a consulting job to help the Aspen Falls Police Department solve the murder. Mercy and her mismatched classmates find themselves in the heart of the murder investigation and when the body of the murder victim suddenly goes missing, Mercy must put aside her feelings of resentment about her gift and put her paranormal abilities to good use.

Son of a Witch
Mercy Habernackle has just gotten the surprise of a lifetime. She has a brother—and not just any brother, a dark, mysterious, and incredibly hot brother.

Given up for adoption twenty-four years ago, Reign Alexander just wants to get to know his long lost sister, but things take a dangerous turn when on his first night in Aspen Falls, a woman ends up dead, in Reign’s bed!

Desperate to prove her brother’s innocence and save her mother from heartache, Mercy enlists the help of the Witch Squad to find out who really killed Harper Bradshaw. But when Mercy discovers that her brother has been lying to her since he got to town, she must ask herself, is her brother really as innocent as he begs her to believe?

Witch Degrees of Separation
The first six weeks of witch college has been emotionally draining and physically exhausting for Mercy Habernackle. She’s had to adjust to a new environment and to a new group of friends, she’s solved several murders, saved her roommate from an abduction, found out she had a brother, AND her mother came to town. All she wants is a break.

When her roommate suggests the Witch Squad take flying lessons as a way to unwind, Mercy is happy to cut loose. But when strange things start happening to her mother and a member of her flying class is found dead, Mercy and her friends must figure out who is behind all the darkness that seems to be haunting their lives. Not only will the Witch Squad unearth long hidden secrets, but they’ll also put their friendship to the test along the way—can they come out stronger on the other side?