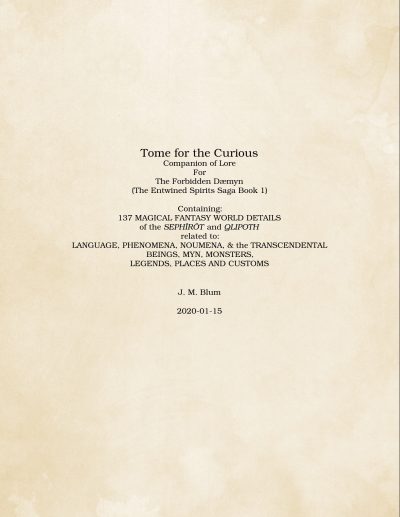 The Tome for the Curious: Companion of Lore For The Forbidden Dæmyn (The Entwined Spirits Saga)

Enter the magical fantasy realms of the Entwined Spirits Saga. The Tome for the Curious is a compendium of the exciting and interesting details of light and dark sides of the worlds. This free guide is the perfect gateway into these enthralling stories.

The Tome for the Curious is the definitive collection of language, magical phenomena, and never before seen monsters, legends and customs for the Entwined Spirits Saga. This fantasy series uses rich and powerful imagery. It describes the eternal struggle of love and mortality between the Trueborn ærendmyn, Gavríæl Kheruvîm, and sultry arch-demon, Lîlît Gamaliel. Each book is set in the magical fantasy world of Sefirot. These are standalone modern literary myths embedded in an overarching epic of unconscious desire, repression, and transcendence. Filled with mythical creatures, they draw from rich traditions of sacred writings, spirituality, Kabbalah, Angelology, and Demonology. Fans of fantasy, fantasy gaming, gamelit, myths, folklore, and legends will love this series for years to come.

J. M. Blum’s enthralling debut, The Forbidden Dæmyn, is the first novel in the Entwined Spirits Saga. This is a never give up book featuring the strongest female lead character known to fantasy. It is a mighty warrior’s attempt at redemption in a battle with a forbidden obsession, but will it be the pride before her fall?

This Tome for the Curious is the perfect companion to The Forbidden Dæmyn. It provides over 130 world details filled with intriguing descriptions but no spoilers!