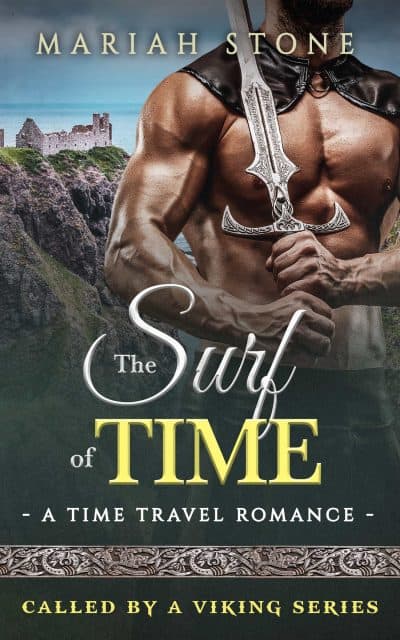 The Surf of Time (Called by a Viking Book 4)

A grieving Viking. A time traveling yoga teacher. Can they release their guilt and open their hearts to love?

Los Angeles, 2019. Cathy is struggling to find the strength to be on her own. With her fiancé trapped in an irreversible coma, she surfs on his favorite beach unable to muster the conviction to turn off his life support. Suddenly flung centuries back in time, she’s horrified to land in the middle of a Viking war. But her heart nearly stops when she discovers a Norseman who looks exactly like her fiancé.

Wessex, England, 878 AD. Tortured by the death of his wife, Viking Andor Thornsson punishes himself by fighting countless battles. But when a gorgeous woman appears from nowhere and pulls him to safety during a losing skirmish, he fears extreme blood loss caused a hallucination. Behind deadly Anglo Saxon enemy lines, he reluctantly agrees to lead her to his stronghold under one condition: he’s not responsible for her fate.

But Andor can’t help falling for the curvy blonde even though she claims she must return to the future. And as they face bandits and hidden dangers together, Cathy wonders whether she’s attracted to the warrior himself or the stark reminder of what awaits back home.

Torn by painful memories and agonizing loss, can Cathy and Andor heal their broken hearts and make a timeless connection?

The Surf of Time is the fourth standalone book in the steamy Called by a Viking time travel romance series. If you like tormented alpha men, brave heroines, and second chance love stories, then you’ll adore Mariah Stone’s heart-pounding Nordic adventure.

Buy The Surf of Time to enjoy a wave of passion across worlds today!