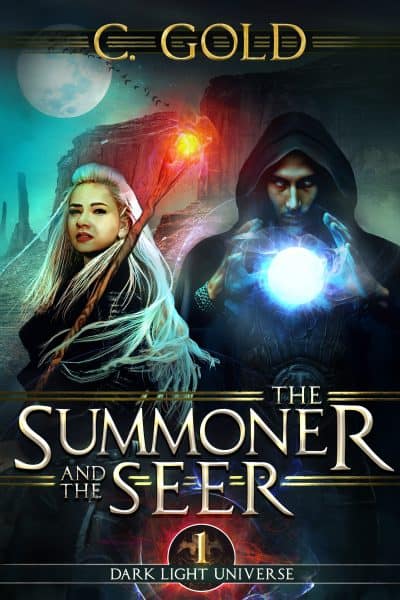 The Summoner and the Seer (Darklight Universe Book 1)

He murdered her family, she sentenced him to eternal torture. Now they have to work together to save the world from the coming darkness.

He murdered her family, she sentenced him to eternal torture. Now they have to work together to save the world from the coming darkness.

Radcliff was widely known as the most ruthless wizard of all time. Nicknamed Destroyer, his brutal actions forced even the most recalcitrant kingdoms to surrender. When the west defied him, he immolated their entire city and thousands died. But this action was the last straw for many. Betrayed by his lover, stripped of power and memory by his mentor, he was locked up and tortured for one thousand years.

Amira’s seer talent has always been unpredictable but accurate. So when it shows her the wizard responsible for slaughtering her friends and family is the key to saving the world, she has no choice but to rescue him. But Radcliff is no longer who he was and certainly not what she expected. It isn’t long before she regrets her part in his sentencing.

Radcliff doesn’t know he’s the most reviled person in history. In fact, he doesn’t know anything because when he wakes up each morning, he forgets his past. A journal lets him relearn basic spells, but it can’t help him build a relationship, and he’d really like one with his beautiful traveling companion.

Together, they must evade their enemies and restore Radcliff’s memory before the world is consumed in darkness. But bringing back the Destroyer may not be wise. It may also break Amira’s heart.

This is a standalone fantasy novel set in the Darklight Universe.