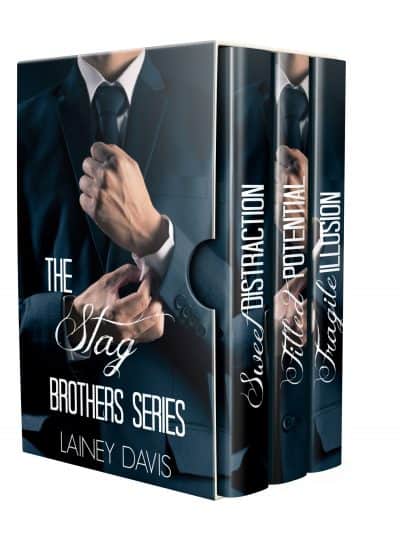 A captivating roller-coaster, a breath of fresh air, the Stag Brothers are scorching hot. Filled with forbidden romance, fake fiancés, and hot-head athletes, this series will curl your toes and tug at your heartstrings.

Readers are calling The Stag Brothers a captivating roller-coaster, a breath of fresh air. The Stag Brothers are scorching hot. Filled with forbidden romance, fake fiancés, and hot-head athletes, this series will curl your toes and tug at your heartstrings. Timber, Tyrion, and Thatcher are the brooding brothers you’ve been waiting for.

Sweet Distraction (Book One)
Tim Stag had it all under control . . . until he hired Alice.

He’s taken charge of his family ever since his mother’s death, raising his brothers while finishing college and law school early. Now he runs an empire, and nothing will stand in his way as he looks to expand Stag Law.

And then Alice Peterson comes along.

The new corporate chef is supposed to give his company an edge, but Alice Peterson is anything but corporate. Wild and spicy as her food, Alice sweeps into Stag Law and drives Tim to distraction. He’s not used to distraction.

Filled Potential (Book Two)
She’s his lawyer. He’s her client. They shouldn’t . . . but they already did.

Ty Stag is back in town. Thanks to his brother’s connections, the pro hockey player got traded to the Pittsburgh Fury, and he hits the clubs to celebrate. He wants an irresistible woman, one night of wild passion. No names. Just heat.

Juniper Jones needs a fresh start. She left behind her cheating boyfriend and wants to cut loose and forget about her problems. She finds just the right man to take her breath away.

When she shows up at work on Monday, eager to meet her new client . . . the boss’s brother . . . she’s breathless for a different reason. Her new client and the man from the nightclub are one and the same.

Can Juniper maintain her professional composure while Ty is in the room? Or will their sparks melt the ice and get Juniper disbarred?

Fragile Illusion (Book Three)
It started with a lie.

A story to clean up his bad-boy reputation. But he never bargained on falling for the girl.

Thatcher Stag doesn’t give a sh*t what his family thinks. He works hard, sells his art for a f*ck-ton of money, and celebrates with the ladies. But his brothers just won’t ease up, so he blurts out the first thing that comes to mind. It seemed like such a small deception to get his family off his back. Only now, he needs to find a fake fiancé.

Emma Cheswick would do anything to get ahead in her newspaper job…except maybe spend time alone with notorious womanizer Thatcher Stag. When Thatcher makes a pass, she tries to turn down the assignment, but her boss gives her an ultimatum: interview Thatcher, or find someplace else to work.

They strike a dangerous deal: Emma plays the part and Thatcher gives her the scoop she needs to keep her job. The illusion seems shatter-proof until Thatcher shows Emma the cracks in his inked-up armor, and she sees past his playboy facade. Can she stick to the rules or does he have a new plan in mind?