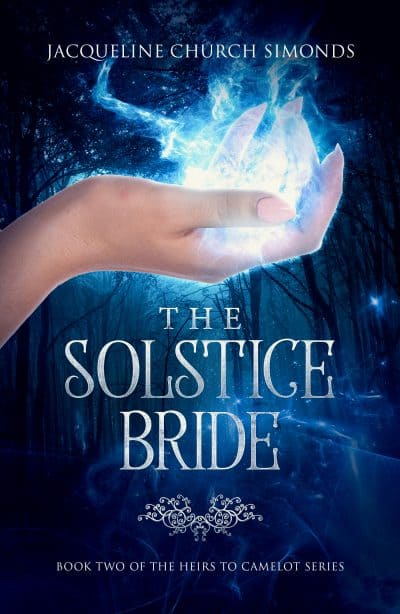 The Solstice Bride (The Heirs to Camelot Book 2)

The dark priestess Morgaine is now the undisputed authoritarian leader of a dystopian nation. In a desperate mission to restore the rightful ruler, Falke must convince Morgaine’s daughter, Princess Ravenna, to travel back in time with him to stop her.

It’s been twenty years after the Healing that restored Britain following a nuclear attack, but things are not as they should be.

The dark priestess Morgaine has taken over the queen’s body, humiliated the king, and defeated his closest advisor and ally. She’s now the undisputed authoritarian leader of a dystopian nation.

Falke Drunemeton has been in exile, biding his time, and studying the wisdom of the Goddessians. In a desperate mission to restore the rightful ruler, he must convince Morgaine’s daughter, Princess Ravenna, to travel back in time with him to stop her.

As the depravity of Morgaine’s plans unfold, Falke finds himself falling in love with Ravenna.

But victory over the monstrous usurper means changing the nation’s fate—along with his own. Will he be able to convince Ravenna to destroy her own mother? And if she does, will he ever forgive himself?

The Solstice Bride is the second book in the Heirs to Camelot series, a dark adventure tale and bittersweet love story.