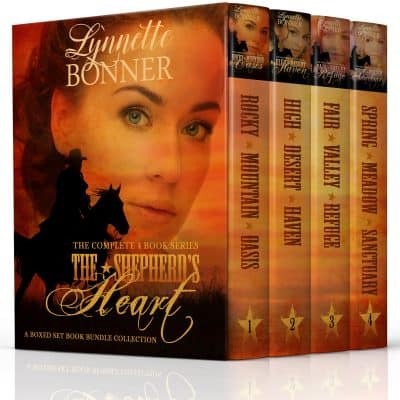 Step into a day when outlaws ran free, the land was wild, and guns blazed at the drop of a hat. This set includes all four books in The Shepherd’s Heart series!

This set includes all four books in The Shepherd’s Heart series!

Rocky Mountain Oasis
Brooke Baker, sold as a mail-order bride, looks to her future with dread but firm resolve. If she survived Uncle Jackson, she can survive anyone.

When Sky Jordan hears that his nefarious cousin has sent for a mail-order bride, he knows he has to prevent the marriage. No woman deserves to be left to that fate. Still, he’s as surprised as anyone to find himself standing next to her before the minister.

Brooke’s new husband turns out to be kinder than any man has ever been. But then the unthinkable happens and she holds the key that might save innocent lives but destroy Sky all in one fell swoop. It’s a choice too unbearable to contemplate . . . but a choice that must be made.

High Desert Haven
When her husband dies in a mysterious riding accident, Nicki Trent is left with a toddler and a rundown ranch. Determined to bring her ranch back from the brink of death, Nicki hires handsome Jason Jordan to help. But when William, her neighbor, starts pressing for her hand in marriage, the bank calls in a loan she didn’t even know about, bullets start flying, and a burlap dummy with a knife in its chest shows up on her doorstep, Nicki wonders if this ranch is worth all the trouble.

To make matters worse, terrible things keep happening to her neighbors. When her friend’s homestead is burned to the ground and William lays the blame at Jason’s feet, Nicki wonders how well she knows her new hand . . . and her own heart.

Fair Valley Refuge
Victoria Snyder, adopted when she was only days old, pastes on a smile for her mama’s wedding day, but inside she’s all atremble. Lawman Rocky Jordan is back home. And this time he’s got a bullet hole in his shoulder and enough audacity to come calling. Since tragedy seems to strike those she cares for with uncanny frequency, she wants nothing to do with a man who could be killed in the line of duty like her father.

But when an orphan-train arrives at the Salem depot, Victoria is irresistibly drawn toward the three remaining “unlovable” children . . . and stunned by a proposal that will change all of their lives forever.

Can she risk her heart, and her future happiness, on someone she might lose at a moment’s notice?

Spring Meadow Sanctuary
Heart pounding in shock, Sharyah Jordan gapes at the outlaw staring down the barrel of his gun at her. Cascade Bennett shattered her dreams only last summer, and now he plans to kidnap her and haul her into the wilderness with a bunch of outlaws . . . for her own protection? She’d rather be locked in her classroom for a whole week with Brandon McBride and his arsenal of tricks, and that was saying something.

Cade Bennett’s heart nearly drops to his toes when he sees Sharyah standing by the desk. Sharyah Jordan was not supposed to be here. Blast if he didn’t hate complications, and Sharyah with her alluring brown eyes and silky blond hair was a walking, talking personification of complication.

Now was probably not the time to tell her he’d made a huge mistake last summer . . .