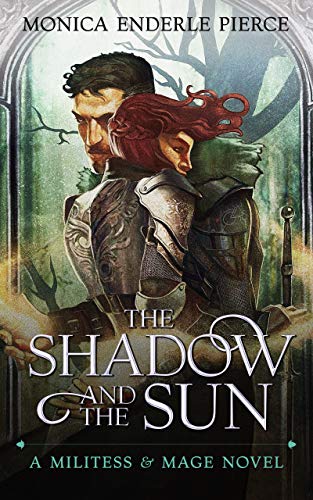 The Shadow and the Sun (Militess & Mage Book 1)

Militess Halina is an accomplished leader, a fearsome soldier, and the unapologetically tough bastard daughter of Ursinum’s king. When she’s ordered to gain the allegiance of Shadow Mage Gethen—a notoriously dangerous necromancer whose brother is an enemy king—she assumes the negotiations will be simple: either he’ll pledge his loyalty or she’ll remove his head.

But the Shadow Mage isn’t what she expected, nor is his situation. Intriguing and powerful, Gethen’s the only man preventing the return of an ancient menace that threatens their world. And though he hates to admit it, his sorcery is failing and he needs her help.

Suddenly Ursinum’s dispute with Gethen’s brother seems petty, and Halina must decide who’s best served by her sword: her king or every man, woman, and child in the four kingdoms and beyond.