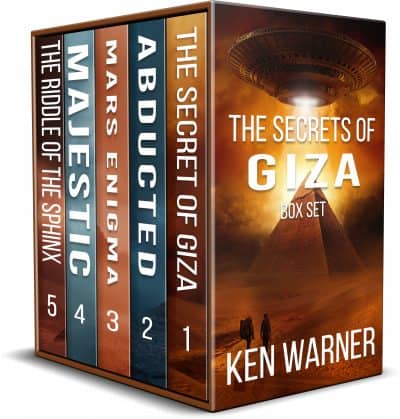 The Secrets of Giza: The Complete 5-Book Box Set

An incredible discovery deep inside the Great Pyramid, a mysterious signal sent from the Bermuda Triangle, and a ruthless experiment taking place in Area 51: how are they all connected?

What if humanity didn’t start on Earth?

The Secret of Giza
An incredible discovery deep inside the Great Pyramid, a mysterious signal sent from the Bermuda Triangle, and a ruthless experiment taking place in Area 51: How are they all connected?

When Malia Kwan exhibits unusual abilities, government agents show up at her home to apprehend her and her twin brother, Jaden—and all hell breaks loose. After their parents are killed, Jaden and Malia flee into the night, becoming fugitives. Before long, they discover their true identities are tied to the lost city of Atlantis—and to the origins of humanity itself. And now a threat emerges that could wipe out the entire human race—unless Jaden and Malia can stop it!

Abducted
The arrival of the Malor spacecraft proved, once and for all, that humanity is not alone in the universe . . . the path of destruction it left behind showed that aliens are not always friendly. Remaining on Earth, Sydney and Brian must now face the aftermath of the Malor invasion.

When a mysterious stranger shows up on Sydney’s doorstep in the middle of the night, she’s drawn into an urgent mystery: there has been a massive increase in alien abductions around the globe, despite the breakdown of Malor technology—and someone powerful is trying to keep it quiet. It falls to Sydney and Brian to figure out who’s behind it all, and why. In the end, Sydney makes a shocking discovery that will forever alter the course of humanity’s destiny!

Mars Enigma
Immediately following the Malor invasion, Malia and Jaden Kwan have left Earth with the Othali, seeking a habitable planet in the distant reaches of the galaxy. But as they approach Mars, the ship’s engines fail. Entering orbit to make repairs, they discover evidence of ancient, technologically advanced life down on the surface. Malia and Jaden join the team going down to investigate.

But there is a traitor in their midst who kidnaps the twins and takes them to a clandestine organization back on Earth. They need the twins’ powers to achieve global conquest. Can Malia and Jaden eradicate this group in time to save humanity?

Majestic
Reunited with Brian and Sydney, Jaden and Malia Kwan are now hunting down their nemesis, trying to stop him from killing off Salvatore’s brethren. But before long, they discover that the clandestine organization, Majestic, has infiltrated the highest levels of the United States government in preparation for global conquest. Can Malia and Jaden stop them before it’s too late?

The Riddle of the Sphinx
A mysterious entity known only as “The Sphinx” is planning to exterminate humanity. But who—and where are they? And how—and when will they carry out their plans? Can Malia and Jaden find them before it’s too late?