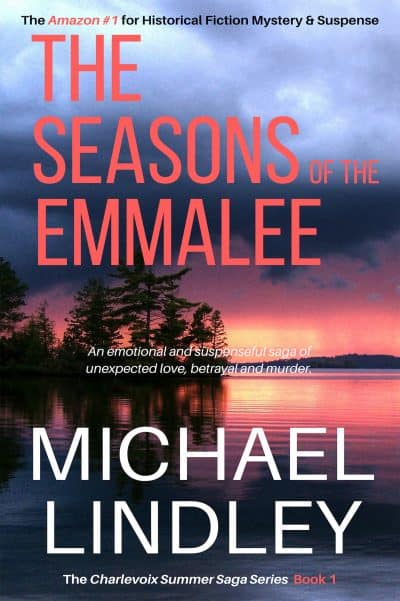 The Seasons of the EmmaLe (Charlevoix Summer Book 1)

It was the summer of 1941 in a small Northern Michigan resort town when Jonathan McKendry first saw the beautiful new summer resident, Emily Compton, on the deck of her father’s magnificent yacht, the EmmaLee. He could never imagine the betrayal, death, and destruction that were about to come into his life.

Jonathan is the son of a local boatyard owner. His small-town life seems in fine order, with good friends, a local girl who loves him, and bright hopes for the future. When he finds himself consumed with his infatuation for the Compton girl and he’s accused of a brutal murder, his dreams and relationships will be shattered.

In a parallel story in present day, Sally Thomason is a descendant of the Compton family who first owned the great ship, EmmaLee. When a new owner returns with the boat decades later, Sally is caught up in the overwhelming emotions of a past family tragedy and her attraction to the boat’s new owner, Alex Clark.

The Seasons of the EmmaLee is a work of historical fiction, mystery, and suspense. It plays out against a beautiful scenic backdrop and compelling historical context. It explores the deep and entangled emotions of class differences, family betrayal, unexpected love, and shattered dreams.

Praise for The Seasons of the Emmalee
“. . . a super summer read.” —Traverse Magazine
“. . . our book of the month and top seller for the season” —Debra Lambers, The Book Nook
“. . . EmmaLee reads elegantly and is artfully crafted.” —Lisa Jensen, Editor, Michigan Blue Magazine