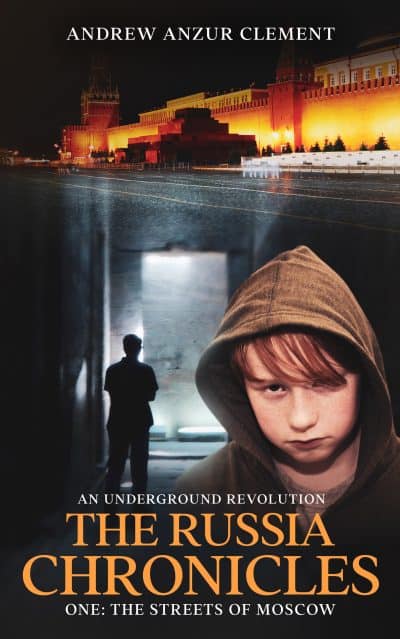 The Streets of Moscow (The Russia Chronicles Book 1)

Stranded in Moscow during an anti-Putin protest, sixteen-year-old Peter Greenfield is left with no choice but to throw his lot in with an unlikely gang of homeless teenagers. Their struggle to survive will lead all the way to the halls of power in the Kremlin.

Sixteen-year-old Peter Greenfield didn’t want to go to Moscow. When his Foreign Service officer parents are called on an emergency mission to Russia, he is left with little choice but to get dragged along.

The trip starts off with Red Square, the Kremlin, and the sights of the city—what any tourist would expect. Then an anti-government protest breaks out. His parents run toward the unrest—along with him.

Lost in the body crush, separated from his parents and his American passport, Peter is rescued by a band of teenagers: children fleeing broken homes and struggling to survive on their own in Moscow’s subway system.

Unable to return to the US embassy, Peter must now throw in his lot with the band of homeless youth who have taken him in. Reluctant and unable to speak Russian at first, he begins to discover Moscow’s secret underworld as he grows closer to his newfound friends, including a resolute but caring girl named Tanya. Together, they face the indifference, hunger, and corruption that are a part of life for Russia’s street children. Life or death could hinge on outsmarting a former member of their gang turned politically powerful enemy, and breaking into some of the Russian government’s most heavily fortified facilities.

As Peter and his friends fight to live another day, he begins to question whether Peter Greenfield still exists, or if he will ever be able to leave behind life on the streets of Moscow.