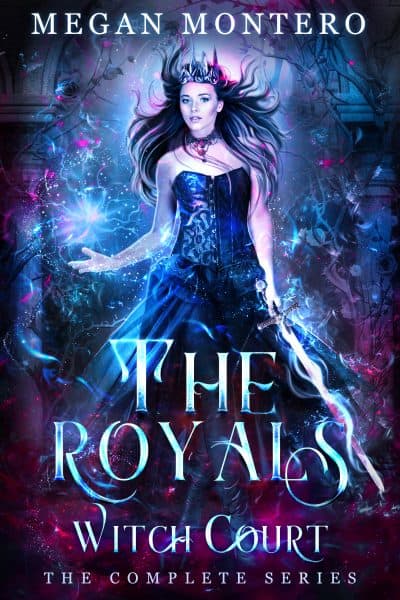 All my life I’ve followed the strict rules my mother set for me. But a week before my 16th birthday, I sneak out and discover why. Turns out I am actually a witch blessed with a gift someone wants to steal from me. And not just anyone . . . the evil King Alataris.

This box set includes all five books in The Witch Court Series and is over 1,000 pages of magic, epic romance, adventure, and twists you’ll never see coming!

All my life I’ve lived under lock and key, always following the strict rules my mother set for me. A week before my sixteenth birthday I sneak out of my house and discover why. Turns out I am not just a normal teenager. I’m a witch blessed with a gift someone wants to steal from me.

And not just anyone . . . the evil King Alataris.

For a thousand years the people of Evermore have suffered under his tyranny. The Mark on my shoulder says I am the Siphon Witch, one of five Witch Queens fated to come together and finally destroy him. The only thing keeping Evermore safe is the Stone that shields the witch kingdoms from Alataris’s magic . . . and now he’s found a way to steal it. Suddenly, I’m sent on a quest to find the ancient spell to protect the Stone. My only hope for surviving is through my strikingly beautiful and immensely powerful Guardian, Tucker. The laws of Evermore state that love between us is strictly forbidden, and it appears I’m the only one willing to give in to the attraction . . .

When the quest turns more dangerous than expected, I realize I have absolutely no idea what I’m doing. I was raised human. But I have to learn my magic fast because If King Alataris gets his hands on me, he’ll steal my magic and my life . . . but if he gets his hands on that Stone, we all die.