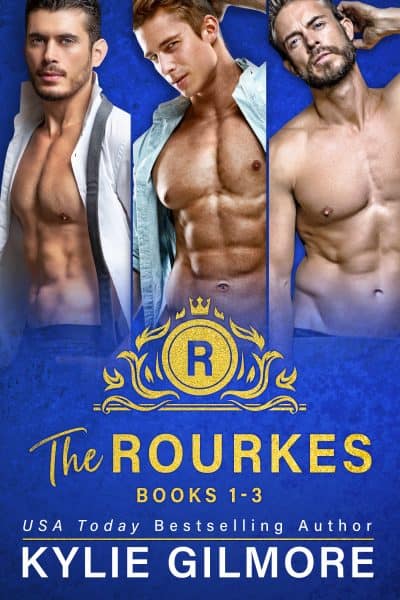 Enjoy three full-length royal romantic comedies, featuring a prince in need of a wife, a royal bachelor auction, and a British rock star trapped with a runaway princess bride!

I’m the crown prince of Villroy, heir to a kingdom, bound by duty to marry and produce an heir.

I expected a quiet arrangement through royal channels, instead I got a palace full of women vying for my hand. And how do they “win” this barbaric game set up by my crafty mother? By figuring out how to save the kingdom’s faltering economy through a series of challenges. This undignified circus is beneath a man of my stature! Proof being that a saucy, ill-mannered woman wearing body-hugging clothes is in the lead. I could never love someone like that, let alone marry her.

I pose as my friend, pick up her inheritance, and return with the cash to keep her out of jail. (Apparently, being a princess in hiding is no excuse for identity theft.) So, yeah, I’m not exactly royal. I’m an orphan, a self-made woman, and proud of it. Suddenly I’m in a battle royale with a bunch of crazy competitive women for “riches beyond our dreams.” I’m in a time crunch, which means I need to win this competition fast. Only, that means winning over the judge, the smoldering hot grim-faced Gabriel. And now I find myself wanting to compete for more than just the money. But could a royal prince ever fall for a commoner like me?

I never expected to be the prime target of a bachelor auction, compliments of my outrageous sister-in-law, the new queen. I don’t care if the internet has turned me into a royal hottie meme, I am not a piece of meat. So when the first eager single woman arrives at the palace, I send her packing. Only the damn woman refuses to leave.

Why would I want to buy a date with an arrogant rude prince? I’m here to do a job, which I desperately need, and no delusional prince is going to stand in my way. Obviously, the “royal hottie” believes the hype.

So how did I end up winning the top prize in a royal bachelor auction, and what will I do with him?

I can’t let myself fall for a playboy. Besides, we’re heading in opposite directions. He’s going on an international tour for a year or more, and I absolutely have to get back to the US. Only this prince is used to getting what he wants, and now he wants me.

Being a rock god isn’t all it’s cracked up to be. It’s become a soulless grind. Which is why I’m now on my mate’s houseboat, far away from the spotlight, hoping to find my way back to the music.

I’ve just discovered a stowaway on board, and I can’t believe who she is. A bloody princess? And the prim little woman won’t leave the boat, so I make an offer to scare her off—a no-strings fling.

Only she says yes.

I say no, and she promptly locks herself in my bedroom.

I swear I’m dropping her off at the next port.

She’s trouble wrapped in a pretty virginal package, and I know I shouldn’t touch.

I’m a runaway bride trying to make a clean escape. But when Jackson Walker discovers me hiding on his boat—after I get over the shock of stumbling upon a rock star’s hideaway—I immediately know he’s exactly what I need. He’s wild, rough around the edges, perfect.

My family would never approve. The press would skewer us. I still want him.

He’s the antidote to my tightly prescribed life.

But can he ever see past my title to the woman I long to be?