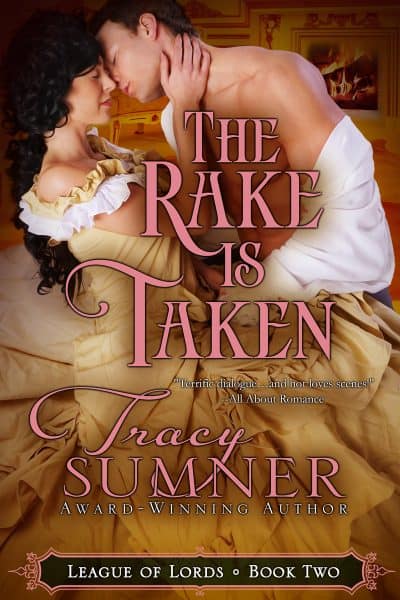 The Rake is Taken (League of Lords Book 2)

A gorgeous psychic. An unwanted betrothal. A tantalizing compromise. An independent hellion, a stealer of time, and the only woman who can capture his heart . . .

A gorgeous psychic. An unwanted betrothal. A tantalizing compromise.

An independent hellion, a stealer of time, and the only woman who can capture his heart . . .

Lady Victoria Hamilton has a supernatural gift, a fiancé, and a guardian angel. She just never expected her protector to be the most dazzling man in England, a devilish scoundrel they call the Blue Bastard. Victoria has agreed to marry for duty, not love, but her unforeseen desire for her mystical angel threatens to destroy not only her plans for the future but the armor surrounding her susceptible heart.

A confirmed scoundrel, a mind reader, and the only man she desires . . .

Illegitimate son of a viscount and reigning king of London’s gossip sheets, Finn Alexander has spent a lifetime hiding his ability to read minds behind charming smiles and wicked behavior. No one knows the real man, and he likes it that way. Until he meets the lone woman who sees the man beneath the disguise—a blue-blooded temptress with the power to bring him to his knees.

As they embark on a journey of passion and friendship, Victoria and Finn must decide if they’re willing to risk everything for the promise of true, magical love.