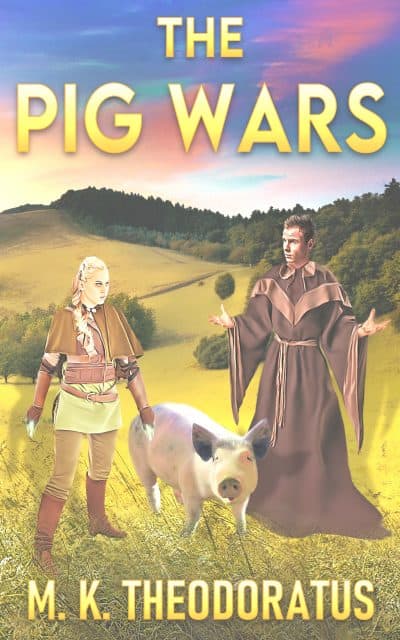 A captivating fantasy: Lady Renna hates the political infighting over who’s going to rule the Marches, but her loathsome neighbor plots to use her to win the battle. Renna becomes a political pawn and must fight to save her life when forced to use forbidden elf-fire.

A strong magic-worker, Lady Rena should be a active Power among the Half-Elven of the Marches. She has withdrawn from the political affairs—wounded by her Father’s death in the last battle of the Rebellion that created a safe-haven for magic workers. She spends her days hiding amidst her weaving, trying to get over the trauma of her past. But this time of peace has ended . . .

Renna’s neighbor Gorsfeld has other plans for the young woman. As the richest man in the Marches, but one without magic in his blood, he decides to woo Rena to gain control of her lands and bring magical skills into his house. But while he tries to get her consent, his plans are upturned by Black Tail, Renna’s pet pig.

In her attempts to defend her people, Renna’s life changes forever. She is forced to use forbidden elf-fire to protect her lands. Renna is put on trial by the Powers of the Marches and must fight for her freedom . . . and her life.

Author M.K. Theodoratus offers a stunning and captivating fantasy novel that will have audiences on the edge of their seats in The Pig Wars. This compelling and intriguing book is unique in its beautifully-crafted world, fascinating characters, and a fast-paced storyline that is both fantastical and political all in one. The Pig Wars is an absolute must-read that fantasy lovers won’t want to miss!