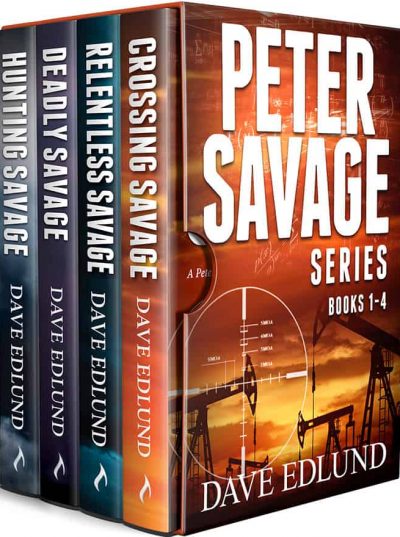 The Peter Savage series has taken readers around the world on a deadly race to energy independence, dropped them in a battle to end a genocide, made them stare down a threat of bioterrorism, and unearthed an unthinkable act of treason. Get books 1–4 today!

Books 1–4 of the Peter Savage series, by bestselling, award-winning author Dave Edlund, have taken readers around the world on a deadly race to energy independence, dropped them in a battle to end a genocide, made them stare down a threat of bioterrorism, and unearthed an unthinkable act of treason that threatened to redraw the map of the Middle East.

The Peter Savage novels have been lauded for their “crackling action” (Kirkus Reviews) and come “highly recommended to fans of thrillers” (Foreword Reviews). The New York Times and #1 international bestselling author Steve Berry praises Peter Savage as “a hero full of grit and determination” and calls the series “required reading for any thriller aficionado.”

Crossing Savage
In this edge-of-your-seat thriller, author Dave Edlund brings readers face to face with the promise of energy independence . . . and its true cost.

As one by one, the world’s leading alternative energy researchers are assassinated, Peter Savage and his friend Jim Nicolaou race against the clock to preserve the secret that promises to change the landscape of the world . . . or start a global war.

In the timely, heart-thumping thriller Crossing Savage, author Dave Edlund presents the theory of abiogenic oil production and the terrifying array of unintended consequences that accompany the belief that energy independence can be realized.

Relentless Savage
In this fast-paced, action-driven adventure, Peter Savage confronts a hidden genocide, genetic manipulation, and a tipping point in the balance of world power.

When Peter’s son, Ethan, is kidnapped by rebel forces in Sudan while on a service trip, Peter will stop at nothing to get his son home. Recruiting old friends and tapping into the expertise of Commander James Nicolau, Peter puts together an unlikely rescue mission that will pit him against deadly forces.

What Peter and his team find in the Sudan is a force far more sinister and dangerous than they could ever imagine. They are drawn into a much larger top-secret government mission, one that leads them to a hidden research site with an army of genetically-perfect soldiers.

Deadly Savage
From the award-winning Peter Savage novels comes a tale of political intrigue, biological warfare, and the fragile balance of world power.

When militants invade the Belarusian State University in Minsk, Peter and his father are caught in the crossfire. Held hostage by gunmen who look suspiciously like Russian soldiers, Peter Savage uncovers a deadly plot to kill thousands of innocent civilians—and lay the blame at the feet of the United States government. In a desperate attempt to avoid a global war, Commander James Nicolaou and Peter are called to the front lines of the sinister campaign, and the stakes have never been higher.

Hunting Savage
When an unthinkable act of treason and a clandestine pact threaten to redraw the map of the Middle East, Peter Savage becomes both hunter and prey.

A freelance hacker uncovers top-secret files about a government cover-up surrounding the 1967 Six-Day War and triggers a murderous rampage at a resort town in Central Oregon. When the files inadvertently land in the possession of Peter Savage, he is targeted by assassins from both sides of the Atlantic and implicated in murders he didn’t commit.

As the body count rises and with nowhere to turn, Savage makes a desperate decision: he draws his pursuers to the Cascade Mountains, where he plans to leverage the harsh terrain to his advantage. Doggedly trailed by both law enforcement and a small army of battle-hardened assassins, Savage becomes both hunter and prey. With his own fate uncertain, Peter Savage fights overwhelming odds to reveal the truth before full-scale war engulfs the Middle East.