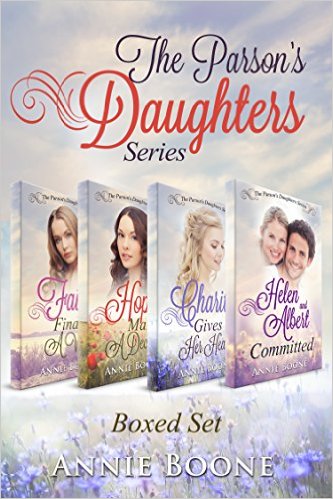 Three sisters with different outlooks on life and faith move from their bleak existence in Georgia after the war to prospering California. They take different paths to find love, use their skills, and live their faith. Find out how their struggles make them stronger.

Faith’s life has become boring and predictable. She’s the oldest daughter and she’s always been dependable and sensible, but she thinks it’s time for a change. How far is she willing to go?

Sweetwater Creek, Georgia, is recovering very slowly after the Civil War, and the few men left in the small one-horse town are unacceptable mates. Her sister wants to go to Atlanta, but that doesn’t feel like the right move for Faith. Her mother doesn’t want to leave at all since her father’s grave is there.

Aaron is a single father who hasn’t recovered from his beloved wife’s untimely death. He’s depended on his in-laws to help him raise his motherless children, but he knows he needs to take steps to be the father his Mary would have wanted him to be.

These two come to an agreement that neither of them truly understands until they’re in the middle of it. When the truth finally hits them, things hit a few snags. Will there be a magical union or will the two be unable to manage their differences?

Hope moved to San Jose to be with her family. She’s almost positive she’s made a mistake. She thinks she wants to move to Atlanta to open her dress shop. But she’s not sure. Then her brother-in-law makes her an offer she can’t refuse. Will this make her happy or bind her further to a town she isn’t comfortable in?

She meets the dashing Andrew Fenton and he sweeps her off her feet. Their romance happens quickly. They seem to be destined for marriage and possibly a business partnership. But as fast as it started, it was over.

As Hope struggles with her faith and trust in God, she’s on a track to disappoint her family and many of those around her. Will the barriers she puts up also keep her from the man she loves?

Charity is the youngest sister of Faith and Hope. She’s lived in their shadow all her life. But she shines so brightly on her own. Her spirit is sweet and loving. She’s a peacemaker and a leader in her church.

Who could be a better match for this parson’s daughter than a parson’s son? Eli has accepted God’s call to the ministry just like his father. He’s passionate about caring for those who need him and God’s love. When he meets Charity for the first time, there are definitely sparks.

Trouble is, when tough decisions need to be made, these two are too afraid to make good choices. They fall back to old ways. It’s a rocky road when Eli leaves town to go to the church he is expected to lead. Charity meets new suitors and Eli doesn’t keep in touch.

How can this young couple find their way back on to the path that God has shown them?

Do you want to know the story of how the parson, Albert Barnesdale, met his loving wife, Helen? They have a love story that lasted through difficulties and happiness. They vow to raise their children to be strong and God-fearing. Albert had an influence on his daughters long after he was gone.

But what about his love story with Helen? What happened before the girls were born?

When they first met, Helen and Albert felt that immediate spark. She knew he was different than the other men she knew. Soon she was going to find out just how different he was. His choices caused them to struggle when they didn’t have to, but his motives were pure and not prideful.

Understanding the love story of Helen and Albert and their commitment to each other will help you see just what Faith, Hope, and Charity came from. Love.