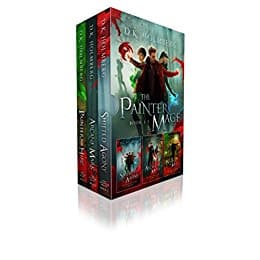 My name is Oliver Morris and I’m a painter mage. I use color and shapes and patterns and infuse them with power. And somehow I’m destined to kill the Druist Mage—if I don’t die learning how.

My name is Oliver Morris and I’m a painter mage. I use color and shapes and patterns and infuse them with power. And somehow I’m destined to kill the Druist Mage—if I don’t die learning how.

Shifted Agony
After ten years spent facing horrors on the other side of the Threshold mastering forbidden arcane patterns, I want only to rest. I came home, returning to the small town I’d known before my exile, and before my father’s death. Only, it turns out my father was hiding more secrets than I realized. When another painter from shows up, she unleashes a deadly threat our world hasn’t seen in centuries.

Arcane Mark
I nearly sacrificed myself to the hunters, nightmare hell creatures that feed on magical ability, to save my best friend Devan. But to truly keep her safe, I have to convince Taylor to return to Arcanus before she releases anything else on the city. Then Devan is abducted by a dangerous painter from the other side of the Threshold, one who might be deadlier than anyone I’ve ever faced, and demands that I find a mysterious and powerfully magical item of my father’s. The only problem is I have no idea what he wants.

Painter For Hire
When a dead painter is discovered near the local diner, a place that should be protected by patterns placed by my father before his disappearance, I have even less time to prepare for the Druist Mage than I thought.  Then an old friend appears with power he should not possess, putting everyone in the city in even more danger and forcing me to make a choice to protect the city or risk losing Devan, something I can’t allow happen again.