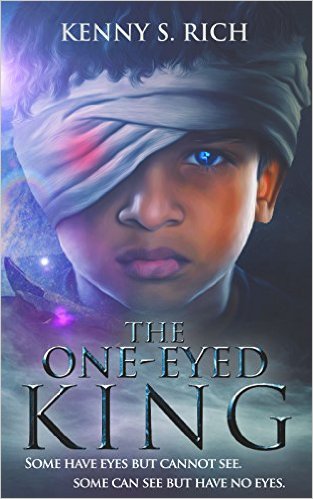 In the future, a nuclear war, perpetrated by a ruling entity known as “The ARK,” has devastated the Earth; to combat it, a blind warrior recruits young blind boy with special powers to help him build a mystic army—the “All-Seeing Army.”

A novel that will change the way you see blind people.

In the year 2020, a nuclear war, perpetrated by a ruling entity known as “The ARK,” devastated Earth, laying over half the planet to waste. Today, in 2029, the future is dark. Every six to eighteen months, a mushroom cloud envelopes one of the world’s once-great cities as the ARK seeks to wipe out a newly discovered resistance movement. Its ruler, The Anchor, and his Superiors are ruthless and rule the world with an iron fist.

Everything changes when a stranger from a sightless boy’s visions appears at his orphanage. Like Iori, this man is blind. He claims the boy is the One-Eyed King of the Land of the Blind, destined to lead their “All-Seeing Army” of blind warriors against the World of the Seeing. He forces Iori to go with him. Will the would-be One-Eyed King turn his back on humanity and lead this mystic army against the world he was once a part of?