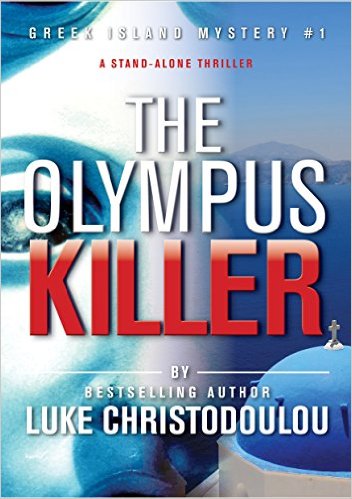 Evil under the Greek sun! If this summer you are thinking of travelling to the majestic, sun-kissed Greek Islands, think again. A sadistic killer is on the loose.

If this summer you are thinking of travelling to the majestic, sun-kissed Greek Islands, think again. A sadistic killer is on the loose.

Over the picturesque Greek Islands, bodies are piling up fast. Bodies tortured, mutilated, and strangely connected to ancient Greek mythology. Hellenic Police Captain Costa Papacosta is called in to assist young, top-of-her-year, foul mouth, food-loving Cretan, Lieutenant Ioli Cara with solving their most complex case yet, while facing his own demons after the tragic loss of his daughter.

The Olympus Killer, as the tabloids refer to him, is a cunning, sadistic murderer with a haunting past, a past revealed to us through his mother’s story set in Dayton, USA.

Will the two officers catch the murderer in time, or will the Olympus Killer have his revenge?

A model with arms brutally chopped off . . .

Twins decapitated and their heads used to form a sun and a moon . . .

Papacosta and Cara are always one step behind the killer all the way to the shocking end!