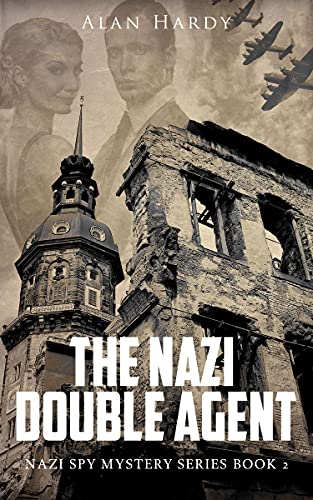 1942. WW2. Fiona, rich and privileged, is enjoying a glamorous lifestyle. But then. . . Something terrible happens. Which changes everything. Which becomes a matter of life and death. Which she can’t divulge to anyone. The secrets start again. Subterfuge. Lies. The killing. . .

It is 1942. Three years into World War Two. Fiona, rich and privileged, is still enjoying a glamorous lifestyle. She is married to gorgeous, young Squadron Leader Matthew Manfred, more than ten years her junior. A certain troubling matter of last year has been cleared up . . . you know, when Matthew (who, it turned out, was a British MI5 agent) exposed her as a German spy . . . and ‘turned’ her into a British double agent. And married her. And presented her, some months later, with a beautiful daughter, Eugenia. All that unpleasant spy business is forgotten now, isn’t it? Everything is fine, isn’t it? Matthew trusts her implicitly. Doesn’t he? She is now a loyal citizen, devoted to England’s cause. Isn’t she? Everything seems to be wonderful. Fiona might easily imagine heaven itself had nothing to compare with her delightful life here on earth. But then… Something terrible happens. Something which changes everything. Something which becomes a matter of life and death. Something which she can’t divulge to anyone. The secrets start again. The subterfuge. The lies. The killing . . . Well, so be it. If her own survival, and that of others, depends upon her wits and native cunning, then there are no limits to what she is prepared to do. And she has to face perhaps the most formidable opponent she has ever come across, in the person of Lillian Morgensen, the cool, unflappable head of Special Operations in Occupied France. Fiona has to step her way carefully through a deadly morass of spies, criminals and double agents, while at the same time trying to decide which French Resistance member is a hero…and which is a traitor . . . What lies ahead of her? Nothing but intrigue, deception, betrayal and ruthless murder. Fiona struggles to retain a grip on events which seem to be spiralling out of control . . . The secrets she hides, and the anguish she suffers, bring her close to despair and breakdown. And then, other moments . . . she finds a perverse, brutal pleasure in the thrill and excitement of it all . . . And always there remain the two central questions . . . What is stunningly gorgeous Matthew up to? And the ultimate question . . . Whose side is Fiona really on?