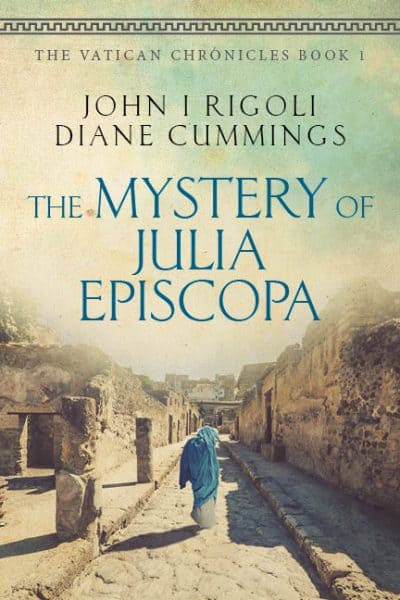 The Mystery of Julia Episcopa: A Tale of Ancient and Modern Rome (The Vatican Chronicles Book 1)

by: John I Rigoli, Diane Cummings

In ancient Rome, a woman flees for her life. Her enemies are those she once called “brother.” Hidden beneath her blue cloak are secrets men will kill for.

In ancient Rome, a woman flees for her life.
Her enemies are those she once called “brother.”
Hidden beneath her blue cloak are secrets men will kill for.

Forgeries that prove the newly self-appointed bishops are not followers of the way, but pretenders who have seized power and will stop at nothing to shape this new religion to their own ends. Now, Julia—a woman who had once walked with Mary Magdalene and taught alongside Paul—must preserve the legacy of the apostles in the face of terrifying danger.

Two thousand years later, classical archaeologists Valentina Vella and Erika Simone are tasked with advising the newly-elected Pope on the historical legacy of women in the early Christian period.

The women stumble across an ancient parchment buried deep in the Vatican archives, a document that has clearly been altered. They find themselves on the trail of a woman who may have been the first woman Bishop in the Catholic faith. To reveal Julia’s legacy will put them in the cross-hairs of a venomous Vatican battle for power and supremacy; to stay silent would make them complicit in an ancient heresy and would betray the teachings that Julia sacrificed her life to defend.

The Mystery of Julia Episcopa weaves seamlessly between modern day Rome and the politics of the Catholic church, and the times and life of a 1st century Roman noblewoman who rose to be a dominant force in the early Christian movement.