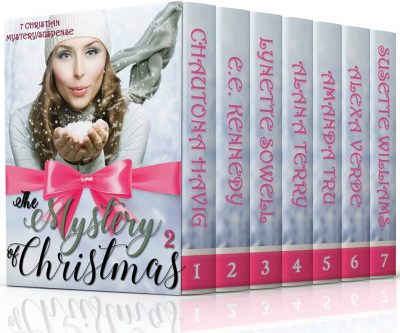 The Mystery of Christmas 2

Enjoy this box set of 7 books! In every book of the set, mysteries are unveiled, suspense abounds, and danger lurks around every corner.

James and Traci Knight have enjoyed an idyllic marriage in their twenty-five years of marriage. But when Traci decides to opt out of Christmas celebrations, things turn ugly . . . fast. James expects her help with their annual Christmas display and refuses to take her new convictions seriously.

So, when James is found dead in their front yard, Traci is the first but not the only suspect. While the police work the case, local mystery thriller author Alexa Hartfield and her irascible aunt join forces to prove Traci innocent before it’s too late. Silenced Knight: Who knew Christmas could be so sinister?

One Red Mitten by E.E. Kennedy

Gigi was only six when she saw her beloved grandfather shot and killed during a bank robbery. The hatred for the perpetrator—who was dressed as Santa Claus—has followed her into adulthood. Now, she’s married to a Marine, has a little boy of her own, and has reluctantly promised her husband serving overseas that she’ll give their son a traditional Christmas, despite the trauma that haunts her. Taking little George to the Mall isn’t as hard as she thought, but there’s something familiar about that Santa. Surely that couldn’t be the same man who killed her grandpa!

Night After Christmas by Lynette Sowell

Jenny Ryan is a single mom whose Christmas plans have been thwarted by an ice storm in Honey Creek, Texas. When a tree crashes into their living room and the power goes out on the cul-de-sac, she and her daughter take refuge with a neighbor, the very single Martin Moreno, a criminal justice professor who is also home Christmas night after working a private security detail. A chilling Christmas gift from Jenny’s past is delivered, and together she and Martin must not only fend off the elements, but also a past she thought was long dead and gone.

Blessing on the Run by Alana Terry

Blessing Lindgren has labored hard for every accomplishment she’s achieved. A working mom with a steady boyfriend, stable job, and years of sobriety to her credit, Blessing has finally prevailed over the pain and trauma of her past.

Until her ex gets out of jail. Jarrod has a proposition, one that if Blessing accepts will risk her safety, her career, and her hard-earned freedom.

But with the secret’s Jarrod’s harboring against her, Blessing’s not sure she can dare refuse . . .

The Night of the White Elephant by Amanda Tru

When Lily Weekes reluctantly attends her Christmas Eve office party, she ends up with the white elephant gift everyone wants. The night turns dangerous when that someone will do anything to get it. Can Lily and Detective Carter Cross find the evidence to unravel the mystery of who is after her, or will Lily Weekes not make it to Christmas morning?

Danger Under the Mistletoe by Alexa Verde

Eager to heal after losing her husband, Rachel Evans moves to the small Texas town of Rios Azules. When one of her clients is found murdered under the mistletoe and her rental is broken into, the former thief realizes danger has found her once again. Her neighbor’s widowed son volunteers to help her. But as Rachel’s attraction to him grows, can she trust him with her heart—or her secret—before someone takes her life?

Annie Spelman discovers her adoptive parents kept her adoption a secret for a reason and someone will stop at nothing short of murder to keep that secret.

Since Ian Wallace was helping his best friend, Michael, keep an eye on his sister when they were children, he can’t forgive himself for letting his best friend’s sister get kidnapped. He’s dedicated his life to finding Janie Lohman and other missing children like her. Finding her, and the truth, may kill them both.