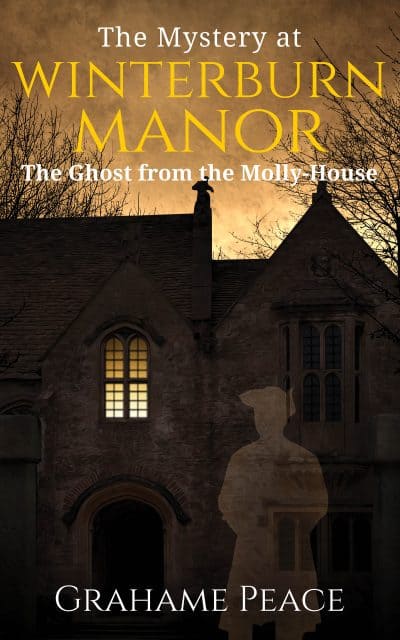 Something evil is lurking at Winterburn Manor, and it’s hiding a dark secret. Can the Psychic Agency, a group of psychic investigators try to unravel a decades-old mystery before they all become Winterburn Manor’s next victims?

A grave covered in strange symbols, in the grounds of a 17th century Manor, what could it mean?

Winterburn Manor is a 17th-century house and one of the oldest Manor houses in England. It has stood empty for over 25 years and is now owned by the famous water-colour artist Elspeth Potter. She has been painstakingly renovating the house for the past four years but has only recently moved into the property, living there alone.

All Elspeth knows about the house’s history is that it was built for the wealthy Evesham family, most of whom are buried in the church graveyard in the grounds of the Manor. The last owner of the house was the famous author Edmund Williams, a specialist in world religions who wrote gruesome horror stories; he’s also buried in the graveyard.

Elspeth doesn’t believe in ghosts but finds it hard to explain what she hears and sees at the Manor. Strange symbols have been etched onto some of the wood panelled walls, and objects and furniture move on their own during the night. The symbols have also been found on Edmund Williams headstone, what could it all mean?

Elspeth is convinced that something evil is lurking at the Manor, and it’s hiding a dark secret. She calls in The Psychic Agency, a group of psychic investigators, and the clock starts ticking as they try to unravel a decades-old mystery before they all become Winterburn Manor’s next victims.

Meet Jasper a time-travelling super-ghost with a sense of humor, in these eerie, historic, amusing, paranormal stories. The Ghost from the Molly-House is a collection of amusing, paranormal-historical-mysteries, which will appeal to fans of antiquity, period detective novels, tales of haunted houses, and all things that go bump in the night. Although this is the fifth book in the series, the novel can be enjoyed as a stand-alone story in its own right.